The plumages of parrots To better examine the plumage, it is necessary above all to know how the feathers are formed and how they are organized.

All follicles of feathers are formed during embryogenesis and are preserved throughout life if the skin tissue is preserved. The proliferation of basal epithelial cells of the follicle forms the germ of the pen. Cell division is more rapid on the cranial side of the latter, the pen grows caudally and the cranial face of the seed becomes the dorsal face of the future pen. At the same time, cellular differentiation takes place at the level of the invagination of the epidermis and forms a cylindrical tube around the feather which will remain present until the end of the growth thereof. Finally, in the center of the feather is formed a cylindrical pulp having a structure close to that of the dermis and having an artery in its axis. It regresses as the pen grows, leaving in its path hoods that will gradually disintegrate.

The feather, therefore, consists of a pulp (internal) and an epidermis (external) which progressively differentiates into rachis, hyporachis, barbs, and barbules thus forming the structure of the new feather

Ever done this with your parrots feathers 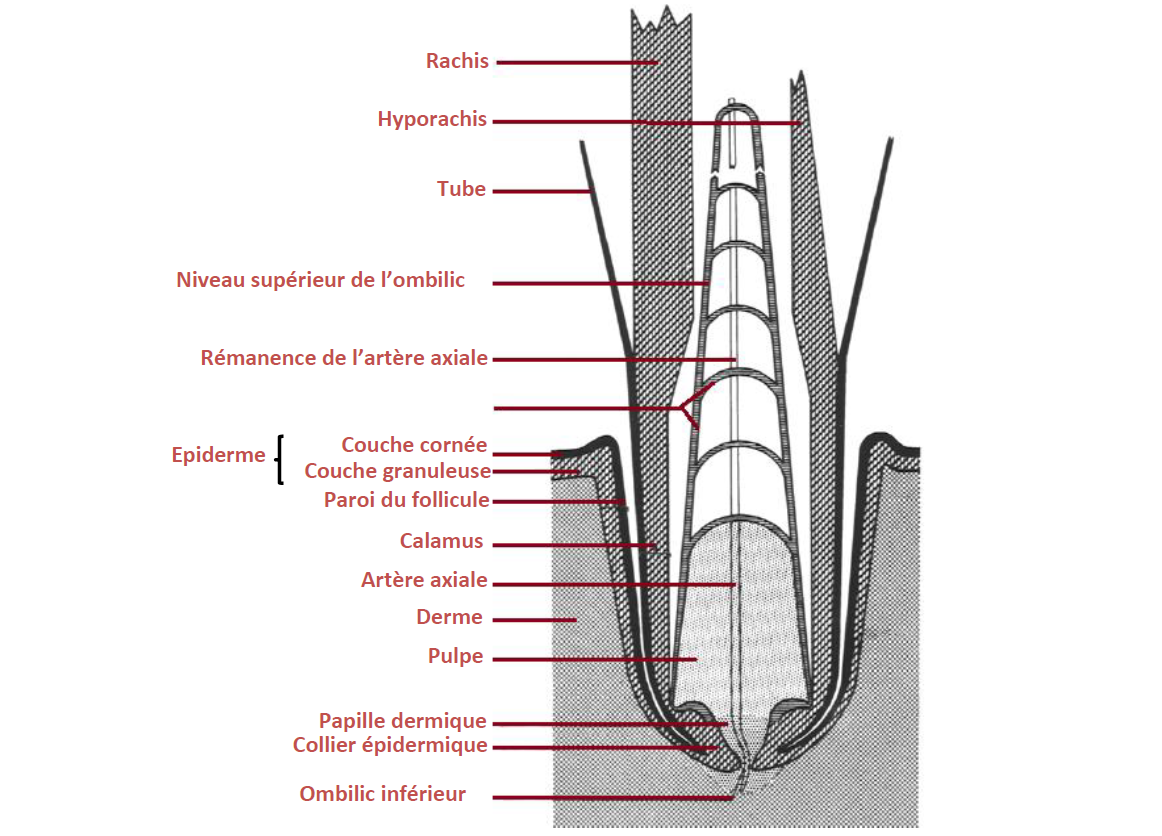 The calamus is the part of the feather on which no beard fits. It is in continuity with the rachis (opposite dorsal) and the hyporachis (ventral face) on which the barbs are inserted. The umbilicus is the junction between calamus and rachis. These form the shaft of the pen that gives it its strength and rigidity

The barbs fit on the rachis and divide on both sides into proximal and distal barbules. The latter is equipped with hooks that hook on the proximal barbules of the next beard, thus conferring its strength to the pen: the barbules being fixed to each other, the barbs are held together and the pen can be s’ press the air like a sail 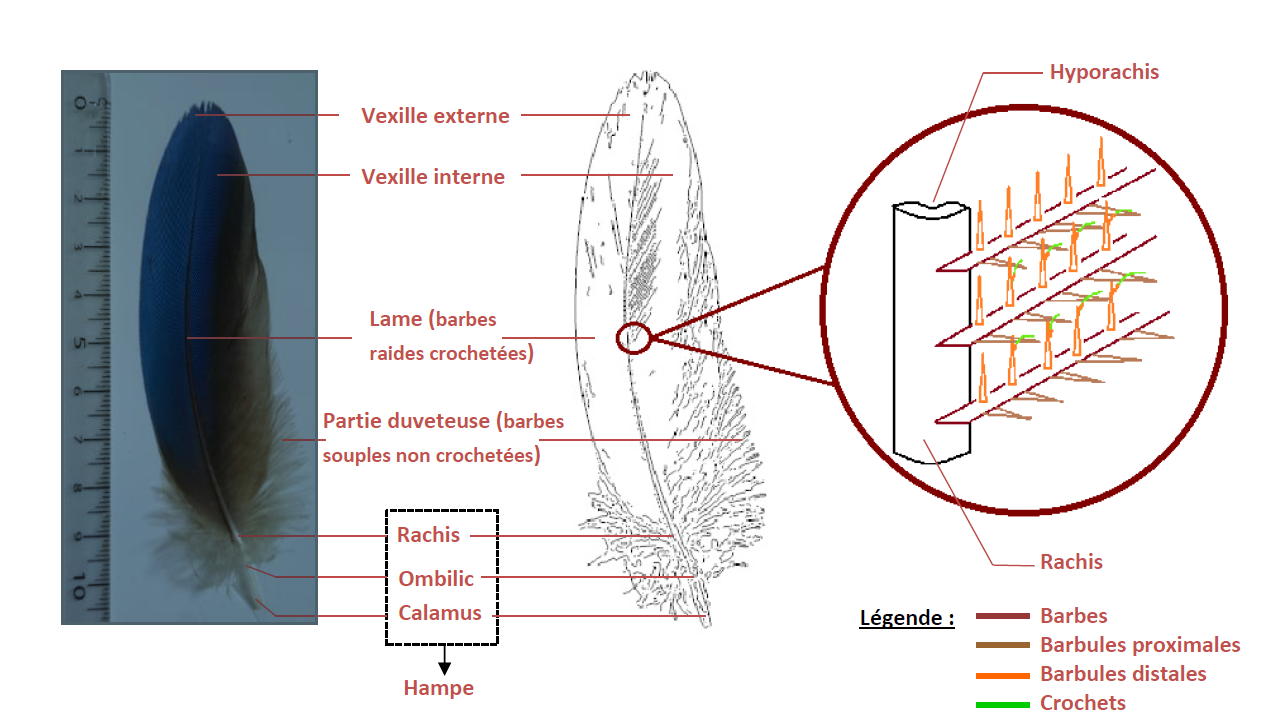 There are different types of feathers spread over the body of the bird:

Presentation of different feathers of a Gray Gabon

What Feathers Tell You About Your Parrot’s Health 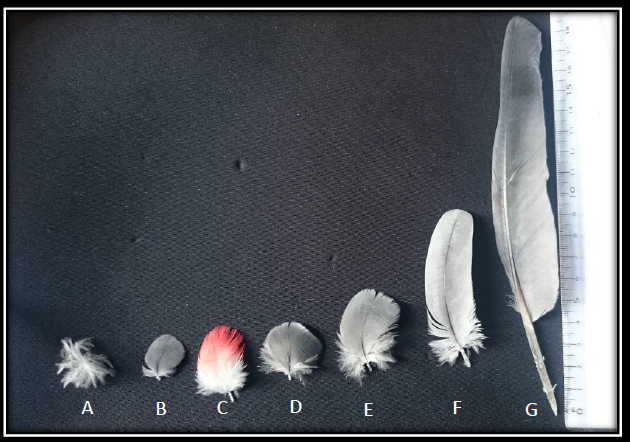 At the level of the wings, the feathers are distributed according to presented below:

All About Your Parrots plumage 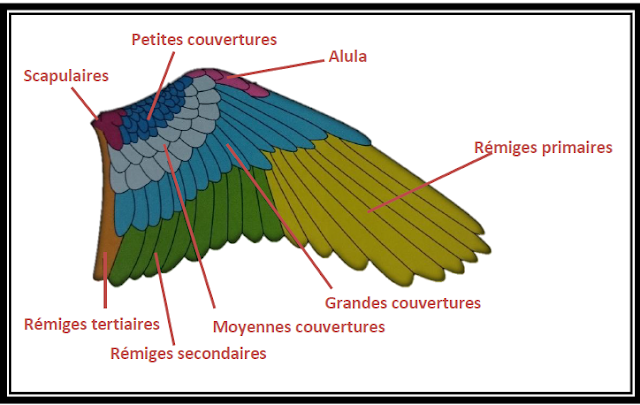 The plumage is, therefore, a complex organ, both by its establishment and by its organization. Nevertheless, even if the detail is not decisive during a clinical examination, the practitioner must understand its operation and disposition.

When examining the plumage of the bird, the veterinarian should pay attention to cleanliness, pigmentation of feathers, lesions or malformations, abnormally feather-free areas or the presence of parasites.

The absence of feathers in unusual areas may be due to self-mutilation or pecking (the practitioner may observe remains of cut feathers), an attack by a congener (broken feathers also sometimes accompanied by skin lesions), parasitism or still a malformation during the shoot (the veterinarian can then notice structural abnormalities on the young feathers in shoot)