the hind crown with slightly elongate feathers; patch from lores and below the eye to upper breast red;

rest of body green except for a red belly patch that shades purple between and onto thighs, the underside of tail yellowish, legs orange. Immature has less color on the undersides.

Forest, scrub, gardens and plantations, wherever flowering trees are present; commoner or more easily detected in cultivated areas than in the forest, but much rarer in the cleared forest or urban land. Blue-crowned Lorikeets are highly mobile, moving about within islands in search of foods as they become available, and apparently a well-known inter-island nomad. 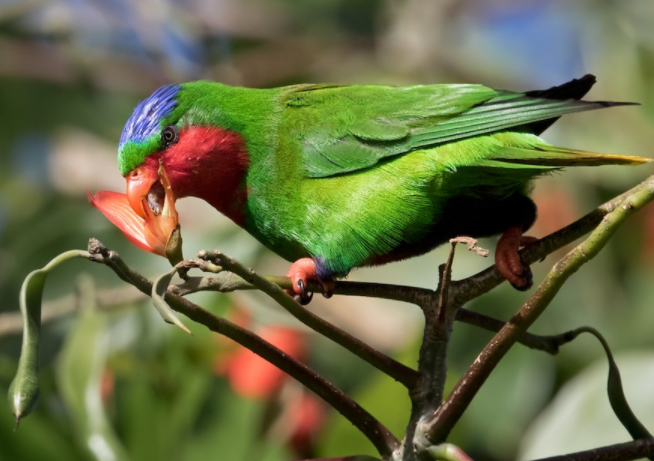 The use of unripe mangoes and flowers of a woody weed Stachyrtarpheta urticifolia was probably the result of a food shortage following a hurricane. 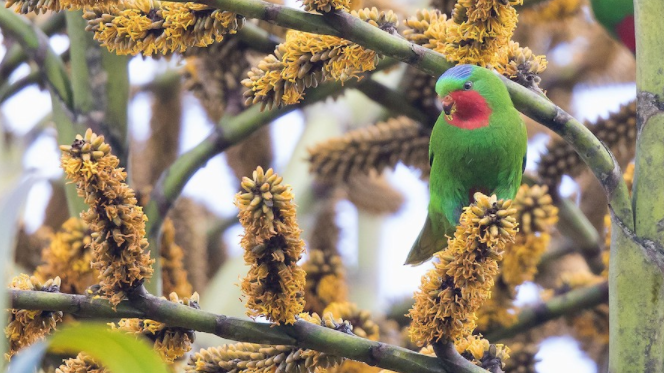 The commonest vocalization is a rather pure, high-pitched whistle, “seee!”, drawn-out and either even-pitched or upslurred, given both in flight and when perched. Also somewhat more complex, squeaky high-pitched notes.

Possibly throughout the year as records are for Mar, Jun, Aug & Dec (nestlings). Blue-crowned Lorikeet Nest a hole in a tree, once a Hibiscus; records of using holes in earth banks probably involved takeovers of old kingfisher nests. Eggs 1–2; incubated in captivity for 23 days. Not globally threatened. CITES II. A BirdLife “restricted-range” species. Common throughout much of the range, including Lau Archipelago, Samoa, and Futuna, with numbers estimated between several 100s and several 1000s; but on Wallis, extinct for unknown reasons, though probably due to black rats (Rattus rattus).

Declining in Tonga, but abundant on Niuafo’ou (several thousand pairs) and, by 1974 report, Niuatoputapu, while uncommon on Late, probably owing to the scarcity of flowering trees. A population of around 60 survives on ‘Eue’iki in the Tongatapu group, 1990, were isolated for probably 100 years.

The extinction of the species on ‘Eua occurred within 50 years of the island’s colonization by R. Rattus. The steady spread of the Jungle Myna (Acridotheres fuscus) through the Fijian, Tongan and Samoan archipelagos is viewed with concern, given its aggressive ability to compete for nest holes.