Male has a large red spot in the center of the crown, underparts and collars more yellowish-green, darker green on wings and head, with a bluish wash to inner and outer webs of all primaries, outer tail feathers tipped black and tail spatula also blackish.

Most likely to be confused with two sympatric Tanygnathus parrots (T. sumatranus and T. lucionensis), but smaller, appearing shorter-tailed (except racquets, which can be difficult to see) and has pale (not red) bill (female T sumatranus also has white bill, but it is much larger).

Similar to wholly allopatric P. montanus but forehead, sides of the head, and nape green. Blue-winged Racquet-tail Female like female montanus but with no (or very little) blue on the face (or red spot on crown). Immature is like female but lacks or has only short spatules.

Part of the P. discurus clade (see below). Was previously thought possible to belong to a group containing P. waterstradti, P. montanus, and P. platenae. Sometimes still treated as conspecific with P. Montanus, but case recently made for species status. Monotypic. 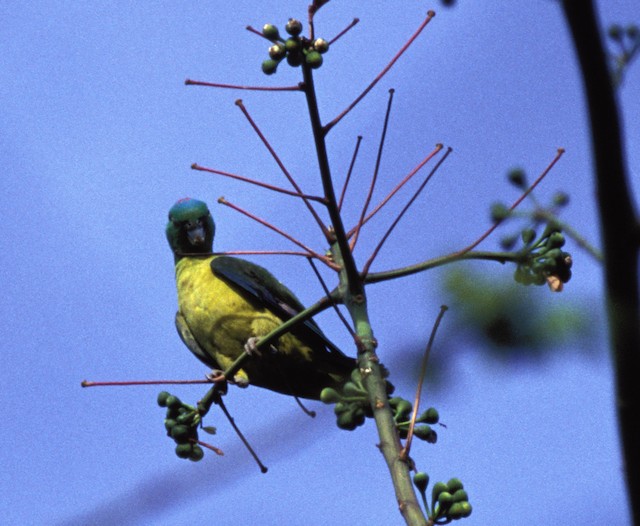 Vocalizations similarly varied to other Prioniturus, including harsh rasping “aaaaack” notes, or trumpeting “lee-aaack  ” with emphasis on the second syllable. Considered to be most vocal in flight.

Sept–Jan. Nest recorded in a large broken-off palm tree in a grove of palms close to the forest.

CITES II. Restricted-range species, confined to the Sulu archipelago EBA. Population estimated in 2012 at just 50–249 mature individuals, despite being abundant at start of 20th century, with huge decline apparent by 1970s.

Only small numbers were observed at three sites in Tawitawi in 1991, just six were seen in Aug 1994, a survey in Jan 1995 missed the species entirely, but it was heard in 2010 and three were seen in Jan 2012; local people consider it to be the scarcest parrot there, but observations by field ornithologists are hampered by security restrictions.

There are no reports from Bongao, Tumindao, or Manuk Manka for at least 90 years, although there may have been a lack of search effort during this time, and it is suspected to be extinct on Sanga-Sanga, where very little forest remains.

The species’ last lowland habitat on Tawitawi is about to disappear, while logging of the few remaining tracts, now confined to rugged mountainous areas, will doubtless be followed by uncontrolled settlement and conversion to agriculture, and habitat loss on some of the other islands in the Sulus indicates the gravity of the situation (virtually no primary forest remains on Sibutu).

This problem is exacerbated by the human use of large birds, including racquet-tails (which are relatively tame), for target practice, many men on Tawitawi being armed with high-powered rifles.

However, claims that the species are captured for trade to Indonesia are unconfirmed, and P. verticalis is apparently not favored as a pet because it cannot be sustained on rice.

Previously considered Endangered, the realization that its population is now extremely small and declining rapidly led to its uplisting to Critically Endangered in 2012. There is an urgent need to establish protected areas for this species.