The science of genetics cockatiel colors discusses the heredity of color variation in feathers cockatiels, Nymphicus hollandicus. Color mutations are a natural but very rare phenomenon that occurs in captivity or in the wild.

Description of the bird:

The Cockatiel Parakeet (or Elegant Parakeet) is native to Australia and is part of the Cockatoo family.
She frequents arid and semi-arid areas and appreciates the proximity of water points. Very sociable, she lives in a group of around fifty individuals. The hooked bill is dark gray. The eyes are dark brown. Legs and feet are gray. (Legs and beaks are pink when young.)
Cousin of the cockatoo the cockatiel has the ability to reproduce sounds and melodies to perfection! It also happens to meet subjects who say a few words.
The Cockatiel’s puff lets us guess its mood. Indeed, when it is peaceful or concentrated its erectile crest is pressed back. Conversely, it stands up to mark surprise or fear. When cold, the Parakeet inflates its wings. She has a long, slender tail.

Cockatiels colors with the name

Many mutations exist, the most common being the wild type. Males generally have a larger puff than that females, have more pronounced orange cheeks, and have a more conspicuous yellow mask (the female has more gray).

Opalines (pearls), can be differentiated from the first molt, the males lose their pearls. The song is also an indicator, but for certain mutations (variegated for example), a DNA test is obligatory.

There are so-called “basic” mutations that can be combined with each other. I will present the main ones to you, and some associations of mutations.

For some, we can distinguish the male from the female thanks to different criteria, and this is after the juvenile molt (which comes between 7/8 months & 10/12 months). For others, it will be necessary to rely on posture, song, or behavior. Otherwise, there are DNA tests.

What is a mutation?

– What can be seen: it is a sudden and unexpected change in the offspring not caused by an external factor.
– What happens: it is a modification relating to the number or the shape of chromosomes (chromosomal mutation) or due to the alteration of a gene (genetic mutation).
We will use the term mutant to designate a bird whose phenotype has been modified by selection in breeding; and the term carrier to designate a bird whose genetic background has been altered without this being visible (the sign “/” is used to indicate what the bird is carrying).
Autosomal recessive mutations: variegated, white-faced, pale-faced, ashy fallow, bronze follow the mutant character is carried on a pair of identical chromosomes (autosomes).
The sex of the bird is not involved in transmission. Both males and females can be carriers or mutants. For a recessive mutation to be expressed, both parents must provide the gene (whether they are mutants or carriers).
If both parents are mutants, we will get 100% young mutants.
If you mate a mutant bird with a carrier bird, you will get 50% young mutants and 50% young carriers. On the other hand, if only one of the parents brings the gene, there will only be carriers in the first generation:
Let’s pair 2 pure subjects, one gray and the other white face:
– In the 1st generation, all young will be gray/white face
– In 2nd generation, if we cross these subjects between them, we will obtain 25% gray, 50% gray/white face, and 25% white face

the yellow and red colors are less intense than in the wild type, the cheeks are orange and the yellow is lighter due to a decrease in the level of psittacine.
Be careful, this mutation is dominant over the white face mutation: a pale face bird can carry a white face but the opposite is impossible. This mutation is characterized by gray-colored feathers. A pronounced yellow mask and orange cheeks are characteristic of the male, moreover, this one has the underside of the tail united.

The female, on the other hand, has a much less yellow mask, it is generally a little gray, and has the underside of a striped tail. They also have pearls under their wings. In the photo above, you have a male on the left and a female on the right.

This mutation alters the melanin of the plumage. This is why it appears as spots of white or yellow. There is no visual difference to recognize a male from a female. In the photo, it is a cockatiel with a lot of melanin damage.

This mutation turns the gray of the wild type into brown/brown because it prevents the oxidation of melanin (responsible for the gray). The physical characteristics of males and females remain the same as for the wild-type mutation.

As with the wild type, young subjects of this mutation cannot be sexed from an early age. It removes all psittacines (yellow and red pigments). In adulthood, the female, therefore, has no mask and a striped tail. The cockatiel male has a plain tail and a white mask.

In the face-white mutation the plumage is entirely gray-black and white because of the complete disappearance of psittacines (yellow and red pigments). At birth, the chicks are recognizable by their white down and not yellow. This mutation removes all melanin. It will let psittacine appear on the entire body, which will therefore be yellow (more or less sustained) and white.

The underwing band (pearls) and the caudal striations are present in female lutino, but not very visible. These peculiarities are, once again, reliable after the first molt. (photos here)

This mutation is a combination of info (melanin suppression) and white face. Females do not have streaks under the tail or pearls under the wings.

The pearl mutation (or opaline)

This mutation is always in “addition” to another and is characterized by beads on the back. The simplest combination is wild-type opaline. Young cockatiels cannot be sexed.

The males are recognizable because they lose their pearls from their first molt. There are other combinations, such as opaline variegated, cinnamon opaline, or even opaline white face.

certain areas of the plumage turn yellow due to the disappearance of melanin. The blending can range from 5 to 99%. The variegated mutation is anti-dimorphic: it is impossible to visually sex the variegated, and the usual criteria (streaks under the tail, spots under the wings) do not apply.

The body is brown, and the eyes are red due to the non-oxidation of eumelanin. The body is silvery, and the eyes are red due to a decrease in the level of melanin. The mutant character is carried on the pair of sex chromosomes. Here, the sex of the bird is very important since the mutant gene is transmitted only by the Z chromosome.

A recessive mutation linked to sex is transmitted visually from the father to the daughter. The female ZW cannot be a carrier, she is a mutant as soon as she receives the gene from her father. 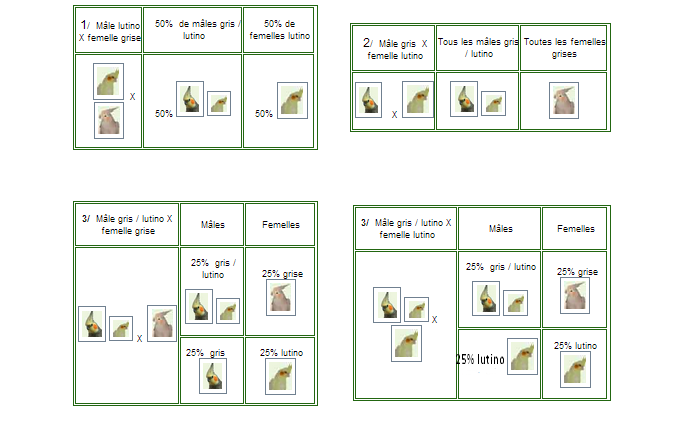 Their mode of transmission allows, in certain cases, the sexing of the young from the growth of the feathers, even from birth (in orange the birds sex in the nest):

In the first case, our pair allows to sex 100% of the young in the nest and in the third case, it allows to sex half of the females.

A concrete example: if we breed an ino male with a wild-type female, we will have young wild-type males carrying ino (yellow down and black eyes at birth) and young ino females (yellow down and red eyes). You don’t even have to wait for the feathers to grow, we know for sure the sex of our chicks.

This method is also valid with combinations of mutations, it is very useful for sexing variegated birds without having recourse to DNA sexing.

the plumage goes from bright white-yellow to bright yellow sustained, the cheeks are red, and the eyes purple because of the almost total disappearance of the melanin pigments (brown and black).

Sexual dimorphism exists but it is difficult to spot: dark yellow streaks on the tail of the female, a slight brown veil on the wings of the male. The face is slightly grayish-yellow, the crest may be dotted with yellow, the belly is light to medium gray, the tail feathers are yellow and slightly streaked with black and there are more or less large pearls on the top wings, due to change in the distribution of melanin.
During juvenile molting, males shed their pearls and visually approach a wild-type bird. Genetically, it doesn’t change anything.
Female opaline mutation cockatiel