Double-eyed Fig Parrot (Double-eyed)13–16 cm; 25–56 g; wingspan 25–28 cm. Green above, yellowish-green below;  crown red shading to orange then green on the hind crown; area in front of eye pale blue shading above it to green;

the area from the base of the bill and chin back to ear-coverts red, bordered dark blue on lower ear-coverts; sides of breast and flanks yellow; some red on the inner part of wing; flight-feathers dark bluish, with the yellowish-white band on the underside of secondaries.

Female has lower cheeks buffy-pink. Immature like a female; a young male acquires adult plumage at the age of 14 months.

Race coccineifrons darker, with the broader yellow-orange band on the crown; aruensis with blue on ear-coverts to the chin, greenish tinge to blue in front of the eye, little or no orange on the crown and yellower-green upperparts, while the female has no red on face, with turquoise-blue crown,

lores and upper ear-coverts, mauve-blue throat-sides and pale greyish-buff cheeks; virago little (almost no) blue on the face, with paler upperparts than nominate, male has paler red on the head than aruensis,

while the female has a red spot on the forecrown, mainly green face, with a blue tint to the crown and no blue on ear-coverts; inseparable has no blue or buff on cheeks, yellower-green underparts, red spot on forecrown (bordered blue at rear) and sexes are basically alike;

marshall is very similar to aruensis but lacks a green tinge, the male has deeper blue in front of the eye, paler red face, darker blue primaries, and the yellow crown band is more prominent; and macleayana lacks red on lores, crown green,

Sexes are similar, but orange-red is virtually absent on lores of females. Immature is basically like a female; a young male acquires adult plumage in 14 months. Compared to formerly conspecific (but allopatric) C. diophthalma, but larger and male letters lack a blue forehead, whereas a female lacks a bold red lower face. 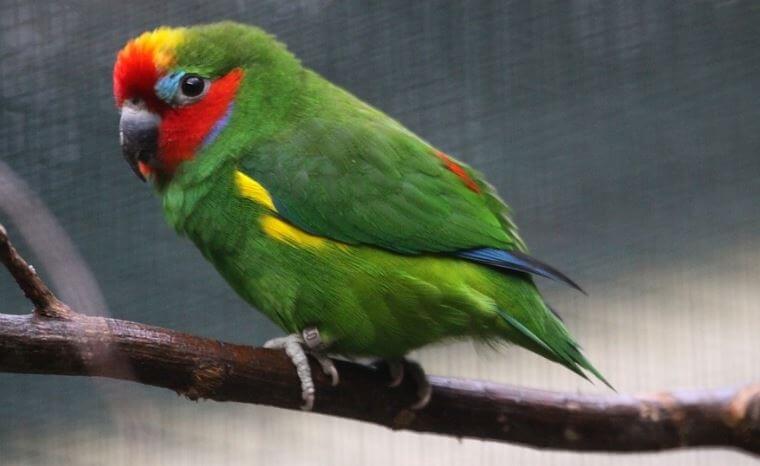 D’Entrecasteaux Is (Goodenough I, Fergusson I).
SUBSPECIES Small patches of subtropical rainforest or edges of larger areas and often at the ecotone between rainforest and sclerophyll assemblages, especially areas with large Ficus trees. Was formerly probably concentrated in the alluvial forest.

Apparently nomadic at least in parts of NE Australia, but the reason for nomadism is apparently unexplained.

Diet is largely comprised of figs, with seeds being preferred to fruit, but no detailed studies. Usually encountered in pairs or small groups.

Gives a thin, high-pitched  “seet-seet” frequently in flight, including immediately before take-off and on alighting; also a chattering twitter, and a high-pitched rolling screech (in alarm or when going to roost),

Flight call is more disyllabic, staccato, and harsh, being somewhat reminiscent of Melopsittacus undulatus, while larger fig-parrots (e.g. in New Guinea) have stronger calls or higher pitched in case of C. gulielmitertii superspecies. Tends to be mainly silent while feeding. Variably recorded: Mar-May in New Guinea, but extending, e.g. breeding-condition female at the hole in Jun, or recurring later, e.g. Nov (adults at nest with young);

Aug–Dec (laying mainly Aug and Sept) in Australia, although nest excavation can occur as early as May (race marshalli) or Jul (macleayana) and chicks have been reported fledging as early as Oct. Monogamous.

Season, probably Oct–Jan, with laying in Oct. Breeds in excavated hollows in living or dead trees; nest and eggs undescribed, but unconfirmed reports suggest that they are similar to those of C. diophthalma.

Not globally threatened. CITES II. Locally common, especially in lower reaches of the altitudinal range, being mainly replaced at higher levels in New Guinea by the C. gulielmitertii superspecies; general sense of rarity, e.g. in Vogelkop and many parts of S New Guinea, probably related to the difficulty of detection.

Total population estimated, in the late 1990s, at in excess of 100,000 individuals, when considered to be stable; however, race macleayana (of NE Queensland, Australia) perhaps numbers no more than 5000 birds and has been speculated to be declining,

although it is known to breed in parks and gardens within the city of Cairns, and is generally common within its comparatively small range. The other Australian subspecies, marshalli, is also common.

ENDANGERED. CITES I. Population most recently estimated at just 50–250 mature individuals, and considered stable. Recorded at scattered sites from Bundaberg south to Hastings R and inland to the Bunya Mts and Main and Koreelah Ranges, but considered to be highly fragmented following declines since 1950 due to habitat loss;

Widespread clearance of lowland rainforest has meant only small fragments of former habitat remain and are vulnerable to the spread of invasive weeds, while isolated stands of fig trees (probably an important source of food in winter) may be lost due to a lack of natural recruitment.

Probably associated impacts from fragmentation, poor quality and a small area of remaining habitat, and small population size, with lack of connections between habitat patches a possible barrier to dispersal, making it difficult for birds to find sufficient food, especially in winter, the may have increased degree of competition between it and other species of birds.