Thyroid Hyperplasia in Parakeet: Goiter in the parakeet, For some time now, Ti-Loulou the parakeet has been taking medication (choline/methionine) to treat his engorged liver.

Its superior beak which lengthens abnormally and which presents bruises betrays the presence of a liver problem. It must be said that Ti-Loulou has a hard head and he doesn’t want to eat anything other than seeds. He still occasionally crunches an avi-cake but he carefully chooses the seeds that are incorporated in it. Even if a fruit and vegetable buffet worthy of the biggest hotels is offered to him daily, he sulks it.

Sometimes he even has fun shredding the carrots, taking care not to swallow any. It’s still fun to see all these little pieces of oranges fall to the bottom of the cage … So when the time comes to stick your nose in the green dish to inquire about its contents, it’s no wonder he looks at his owner with the arrogant gaze that only picky birds can have.

He seems to be saying to her: “Do you really think I’m going to taste this feed?” For her part, Mrs. T is not too worried about the crazy behavior of her parakeet. She tells herself that by dint of insisting, her bird will end up varying its menu. Especially since she was reassured by telling her that it was not necessary to add vitamin and mineral supplements to quality bird seeds (live seeds and vitamins ) because they are the best.

One morning, Ti-loulou begins to sneeze at an abnormal frequency. He had already started to moult some time before and since it was normal for him to sneeze more often during his molting periods, Ms. T did not pay too much attention. But this time, something abnormal is happening.

The molt drawing to an end, Ti-loulou does not stop sneezing. Groans are also audible. As Ti-Loulou is still in good shape and has not stopped talking and playing, Mrs. T decides to observe him for a few more days. But now a second molt begins at the very moment when the previous one ends. As the bird’s respiratory symptoms persist, Ms. T sees the vet. On examination, the parakeet is oily, and small, wet groans are audible. An antibiotic is prescribed to treat what appears to be a respiratory infection. Unfortunately, despite the administration of the drug, the bird’s condition worsened and the breathing difficulty worsened. Ti-Loulou now stands inflated on his perch and is shot. He wiggles his tail with each breath and if he tries an effort, his groans get worse.

The parakeet is therefore back to the vet for a reassessment. New symptoms are then noted: its crop is filled with liquid and the bird moves its head a lot and tries to swallow often. The breathing sounds grew louder and he began to peck his neck. A diagnosis of goiter becomes more and more probable given the evolution of the case and the diet almost exclusively composed of seeds of the bird.

As Ti-Loulou’s general condition does not require hospitalization, the decision to return him home with a supplement of iodine ( Lugol ) was the chosen option. At 10 p.m. that same evening, Ti-Loulou takes his first sip of water containing Lugol. The next morning, the symptoms had not worsened and Ti-Loulou was already breathing better. After 48 hours of treatment, the parakeet’s health had improved by 60% and after 2 weeks she was fully recovered.

The pathologies of the thyroid gland are well known in birds. However, it is parakeet goiter that is by far the most common condition. 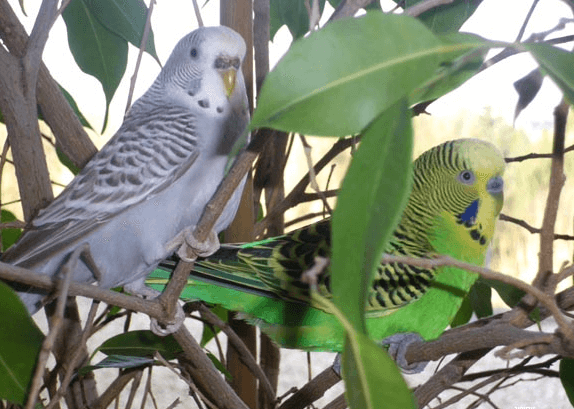 Birds have two thyroid glands, located in their neck, right at the entrance to the rib cage. They are located on either side of the trachea and the jugular vein passes very close to them. The glands are oval and creamy white in color. They measure on average 2 mm and weigh 3 mg in the parakeet. When a parakeet suffers from goiter, its glands can reach the impressive weight of 300 mg and measure up to 1 cm each!

The hormones secreted by the thyroid gland ( T3 = triiodothyronine and T4 = thyroxine ) are essential for life and are used to regulate several functions of the body. Among other things, they stimulate the metabolism, help ensure the stability of body temperature despite variations in ambient temperature, control growth, ensure the maturation of the gonads and regulate the molt of the bird by allowing the growth of new feathers. The thyroid makes mostly T4, and to do this it needs the thyroglobulin in the blood ( T4 is converted to T3 mainly outside the gland.). Since iodine is absolutely necessary for the manufacture of thyroglobulin, a dietary deficiency involving this mineral results in the thyroid stopping the production of T4.

When there is not enough T4 circulating in the blood, the anterior pituitary gland activates and produces a hormone called TSH. Under the effect of this TSH, the epithelial cells of the follicles of the thyroid gland activate and multiply in order to make T4, but to no avail. There is no thyroglobulin available in the blood due to the lack of iodine. The gland gets bigger and bigger, reaching 100 to 150 times its normal size. If the bird does not receive iodine, the vicious circle persists: no iodine, no thyroglobulin, no T4 to stop the production of TSH which accumulates more and more in the blood and which constantly stimulates the thyroid gland to produce T4 that it is no longer able to make.

It is interesting to note that avian thyroglobulin contains more iodine compared to that mammals. This, therefore, makes the birds more likely to develop a goiter secondary to this nutritional deficiency.

The symptoms encountered in a bird with goiter are caused either by the lack of T4 or by the mechanical effect of compressing the organs by the gland that has become too large.

Administration of iodine is curative for birds with goiter. Sometimes hospitalization may be necessary for individuals in respiratory distress. Stress and frequency of handling should be kept to a minimum during this period. Treatment is first initiated with injectable iodine and then continued with iodine ( Lugol ) in the drinking water when the bird is doing better. Hospitalization also makes it possible to provide supportive treatments ( oxygen therapy, etc. ). Treatment with Lugol can last 3 to 4 weeks depending on the case. 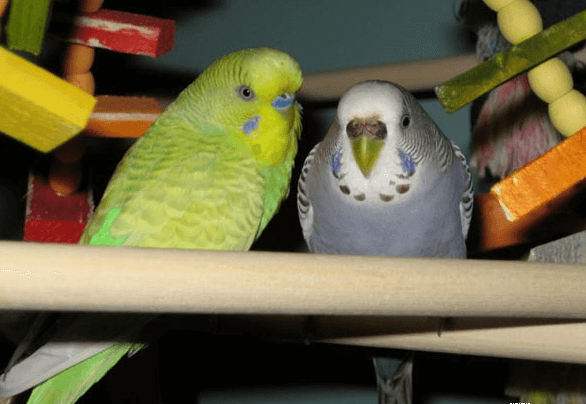 A 35-gram parakeet needs to consume 20 micrograms of iodine per week in order to meet its needs. It is therefore important that its diet is varied and that its seeds are sprinkled with a vitamin and mineral supplement containing iodine. For a parakeet that consumes only seeds ( even high-quality ones) without any added supplement, the risk of developing goiter is real. Although the seeds are believed to be complete, the vitamins and minerals added to them are in very small amounts. In addition, an unstable mineral like iodine quickly loses its therapeutic activity after it is added to the mixture. Iodine is really unstable, especially if exposed to air and light: even in an amber, well-sealed bottle, Lugol quickly loses its effectiveness.

By consulting the list of ingredients contained in the bag of Ti-Loulou seeds, we can see that some goitrogenic foods are among the first ingredients on the list ( flax seeds, soybeans and kale.). However, iodine is far down the list as the second to last ingredient … In large amounts, goitrogenic substances prevent T4 synthesis even if there is enough iodine available. It is therefore easy to understand from this example that even the so-called premium seeds cannot meet all the dietary needs of a bird. You should therefore add extra powdered vitamins and minerals daily to your bird’s seeds if they are his only menu. Read the ingredient list of the supplement you choose carefully and make sure it does contain iodine and that the expiration date has not passed.

Examples of goitrogenic foods: Birds should not be prohibited from eating them, but it is not advisable for a parakeet to consume large quantities.

Another source of iodine that can be made available to the parakeet without believing that it is sufficient on its own is the iodine mineral block.

It is interesting to use, but the iodine it contains quickly loses its effectiveness. It must be renewed regularly.

Finally, for some parakeets, your veterinarian may advise you to give them Lugol in their water once a week as a preventive measure.