Immature is paler, with pale under tail-coverts, yellowish tinge around the bill, and mustard-colored flush to face, throat, and upper breast. The only grey or brown parrot in Seychelles.

nonetheless, the separation of sibilans from barklyi at the species level is accepted here on several grounds. Statement in HBW that race barklyi of Seychelles “apparently indistinguishable from sibilans” erroneous, but in morphology, the two are extremely similar.

Praslin and Curieuse (no breeding recorded in latter, in Seychelles.

Native hill forests dominated by endemic palms such as Lodoicea maldivica, Nephrosperma vanhoutteana, Verschaffeltia Splendida, Phoenicophorium borsigianum, and Deckenia Nobilis, as well as in river valleys with tall trees and mixed forests comprising palms and introduced broadleaved tree species such as Paraserianthes falcatarius, Swietenia macrophylla, Tabebuia pallida, and Sandoricum koetjape, or native trees like Mimusops seechellarum or Northea hornei; even inhabits coastal beach crests populated by Callophyllum inophyllum, Terminalia catappa and Casuarina equisetifolia, and will visit agricultural land and other areas, such as hotel gardens, at lower elevations to feed.

Makes regular daily movements between roosting areas in highlands and lowland agricultural areas where the birds may feed; regular movements between Praslin and Curieuse (c. 1 km away) have also been reported (4).

of endemic palms (except Lodoicea) and other native broadleaved trees like Dillena ferruginea and Craterispermum microdon, introduced trees such as Casuarina equisetifolia and Sandoricum keotjape, the introduced creeper Tylophora indica, and Pouteria obovata; seeds of the endemic Phyllanthus pervilleanus can be important, while very young coconut palms (Cocos nucifera) and new shoots and seed cones of Casuarina are also taken.

(Averrhoa carambola) and possibly Ficus sp., with seeds apparently being particularly targeted, including those of the herbaceous Lophosonus sp. Takes flowers of Ceiba pentandra and Carica papaya .

Can be extremely vocal, both perched and in flight, generally during the day but also sometimes on moonlit nights, with vocalizations being more frequent at the start of the breeding season and when birds are in large groups.

Varied high-pitched whistles, usually monosyllabic, occasionally trisyllabic, and more melodious during the breeding season; typically a medium to high-pitched, clear “kee-ker-kee-ker” or “keer-kerker” lasting 1–2 seconds, or an even higher “ki-kwishh”, “kwikshhh” or “kiiish”, a single mellow-sounding “tuweer” or keer” and a harsher, higher-pitched “kreeer kreer kreeer” in crescendo, uttered at a rate of c. 1 note/second, as well as a low-pitched, sharp “kek … kek” .

The season commences Sept-Oct, with eggs laid Oct–Jan (mainly Nov–Dec) and young cared for until at least Mar (post-fledging care can occupy several months). Monogamous and single-clutched (even in case of nest failure). Nests in tree holes, e.g.

in palms (Deckenia nobilis, Lodoicea maldivica), also in Albizia, Pandanus hornei, and Casuarina, typically 2·5–9 m above ground, with cavity depth of 1·2–3·6 m and diameter of 23–26 cm; will also use nest boxes.

Breeding success: usually only two eggs, even in three-egg clutches, hatch, and even if three hatches, the third chick typically dies;

just three of seven nests each produced 1–2 fledglings, with nest predation (apparently mainly by rats and usually at chick stage) being the main cause of failure, but success is higher in rat-proof nestboxes.

In a study during 2009–2013, 27 of the 28 known breeding attempts were in hollows of Lodoicea maldivica trunks at c. 2 m above the ground, the mean clutch was 2·2 eggs (n = 22), and 53% of breeding attempts produced at least one fledgling (37% fledglings per egg). No data on adult survival or longevity. 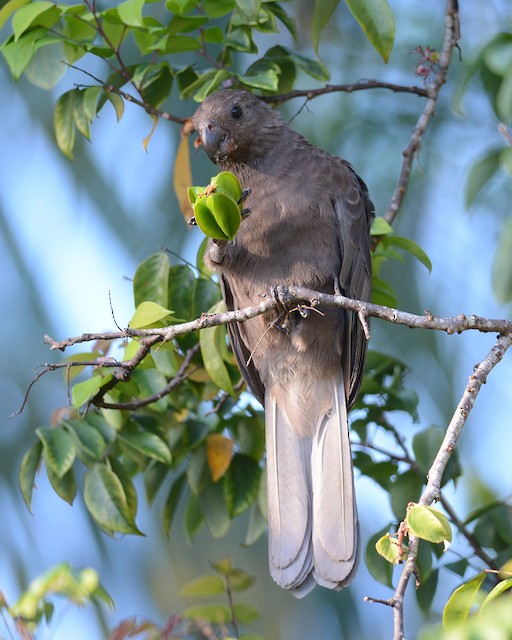 No individuals were detected on Curieuse during point counts over four days and during supplementary fieldwork, suggesting that there is no resident population there.

Prior to these surveys, the most recent population estimate on Praslin was 645 individuals, using distance sampling at 39 random points;

however, this study was deemed to have several methodological and analytical constraints, which meant that assumptions of the distance sampling method were not met and resulting in an estimated range too broad to serve as a basis for conservation planning.

After reviewing recent survey results, an estimate of a total breeding population of < 200 pairs was made, suggesting that there could be fewer than 400 mature individuals, while a review of previous surveys indicates that the species has recovered from a low point of c. 30–50 individuals in the late 1960s.

The decline prior to this was thought to have been driven mainly by predation by introduced rats and hunting by settlers and farmers, but the most serious current threats include diseases such as Psittacine Beak and Feather Disease,

competition from introduced bird species for food and nest sites, and habitat destruction caused by fires, with potential threats including persecution, pesticides, netting of bat species and inbreeding.

Forest fires may be the most serious of these, with records since the early 1980s showing that every c. 10 years a large fire occurs.

The presence of Psittacula krameri on Mahé, one of which has been recorded on Praslin increases the risk of disease. Persecution by farmers is regarded as a minor threat.

Other risk factors include its low genetic diversity and large, and so-far unexplained, fluctuations in breeding activity between seasons.

Protected by law since 1966 and endemic palms have been protected since 1991, while the restoration of native palm forests on Praslin and Curieuse is ongoing.

Occurs in Praslin National Park, established in 1979, and Vallée de Mai was designated a World Heritage Site in 1983; artificial nest boxes have been provided since 1983.

There is a firebreak around the core breeding area at inline media, but it is not guaranteed to function in the event of a large fire. Measures are being undertaken to eradicate Psittacula krameri from Mahé and they are being screened for the Psittacine Beak and Feather Disease virus.

A national action plan for the species was produced in 2009 and includes plans to introduce the species to Silhouette, along with captive breeding on Frégate and Île du Nord if appropriate habitat management can be undertaken.

Other conservation actions identified include the control of introduced species, renovation, and improvement of nestboxes, population monitoring, and public awareness campaigns.