by Amanda
6.4kviews
1.4k shares
Contents hide
1 Why should we not encourage the sale of unweaned parrots?
2 The importance of good socialization in the young parrot
2.1 If he doesn’t learn, he doesn’t survive!
3 Socialization is the gradual transition from a state of total dependence to that of total independence

Why should we not encourage the sale of unweaned parrots?

Each year, as part of their practice, veterinarians as well as behavior workers receive their share of young parrots with serious health and / or behavior problems directly related to poor feeding or weaning technique and a lack of shouting for socialization. And long live the hand-feeding of baby parrots!

Too many unfortunate accidents happen out of ignorance. In addition, very importantly, a young parrot who has suffered a trauma from feeding and / or weaning will have very serious behavioral pathologies for the rest of his life. Most breeders know a lot about how to produce a physically healthy parrot ( incubation, feeding, hygiene, diseases and co.). But some forget or ignore that the psychological development of the young bird is as important as its physical development. The future well-being of the bird will depend on it. Too often, we hear some breeders claim that they do not take much care of the baby for fear that he will become too attached to them. This an absolutely ridiculous claim. The parrot can create attachments and / or detachments with different people throughout its life. If at the base, he was able to develop his identity and his personality, these different attachments will be done without problems. So, if the breeder does not wish to create an attachment with the chick or to take in hand the “good” socialization of his production, The breeder who is only concerned with the physical production of parrots does not realize the consequences this will have on the development of the bird’s personality. Consequences that can cause serious personality disorders and even behavior; serious enough at least, to diminish the pet potential of their “product”. Yet the information has long been available.

The young parrot, isolated very early from its peers, systematically impregnated with a species that is not its own ( the human ), fed by gavage, handled only during feeding, forcibly weaned too young, and behavior of NIL exploration, will develop a single emotivity so low that we must be careful not to step on it … All this to produce us at the end of the line, another of these cute baby parrots EAM whose guarantee accompanying the bird during adoption will come down to a superb sensory deprivation syndrome… A whole program in perspective!

In nature, the impregnation of the young parrot is “normal” – it is already that! It is the parents, then the other members of the group who will serve as models and will be responsible for guiding the young bird in learning both social skills and those related to its survival: vocalizations and connection calls, social behaviors, food research, recognizing, preparing and eating different foods, locating predators, where to sleep, etc. This is what we call socialization, that is, the method by which the bird acquires its identity, social experience and ability to survive.

During this training, the young will gradually increase the distance which separates him from his parents. As his confidence grows, parents will continue to supervise, guide, and communicate with him. The young will still come back to his parents for a very long time to be fed even if he no longer really needs it. This will strengthen his sense of security. In the wild, parrot parents continue to feed the young long after the young have started to eat on their own. They no longer regurgitate food like when they were a baby, but they continue to teach and encourage the youngster to try new food by taking this food in their beak and crushing it into small pieces and offering it to him. This is how young people learn to eat on their own, watching their parents handle the food. It is a long learning process that often spans several months. With the help of his parents, the youngster will grow up in safety, explore his environment and accumulate new experiences until he reaches his total independence. 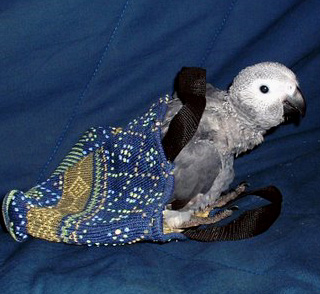 The same goes for a baby raised in captivity. Very early on, it is essential for the young parrot to have a good socialization ( which should include a normal impregnation… to its species ). The young parrot must learn, through a benevolent human mediation, to adapt to the human environment, otherwise he will spend his life in confusion and develop behaviors that will seem to work only for him. These behaviors can become chronic when the parrot reaches its period of independence and settles into maturity. These behaviors will create stress and in many cases physiological and / or psychological health problems.

Young people have to develop their personality and, to do so, they need a stimulating environment. If he is not used to the changes from a young age, he may develop fears or phobic behaviors when the unusual occurs. Positive socialization, started at a very young age, careful guidance and lots of safe adventures make a huge difference in the emotional and psychological development of the young parrot.

In the context of breeding companion animals, it would be important to take into account the needs of birds by letting the natural parents feed and take care of the development of their offspring … or if not, by gradually teaching them to feed themselves by itself ( despite the fact that without a suitable model to observe and imitate, this risks being quite long ), rather than being force-fed and forced to wean according to the calendar ( such and such a species must be weaned at such age …). It is not uncommon to see a cockatoo take up to a year to be completely weaned and independent of its parents: imagine the damage if you force it to do so at three months. – The “puppy / 3 months” model is still far too widespread among parrot breeders.

It is taking time to socialize, stroke, play and stimulate the bird outside of feeding hours ( even if it is still at the nest with its parents ).

It is to encourage the curiosity of the bird by presenting it the world in which it will evolve by encouraging exploration behavior, by making it live safe adventures: Parrots are very intelligent animals that need direction. It should not be taken for granted that a bird fed by hand by humans will guarantee a good companion parrot … far … far … far from it!

This is why you should not encourage the sale of unweaned young parrots. In fact, why not leave the food weaning of baby parrots in the hands of real professionals… NATURAL PARENTS!