Buru Racquet-tail 32 cm. Bill bluish-grey; face, forehead, and ear-coverts rich green; mid-crown to nape, mantle and shoulders purplish, shading on back and wings to olive-green, and in turn to oil green on flight-feathers, rump, and tail, spatulas dark blackish-blue; the leading edge of wing blue.

is a species of parrot in the family Psittaculidae, Female lacks purple except as stain on hindneck and mantle. Immature like females but lacks spatulas.

May form a species pair with P. platurus. Monotypic.

Rainforest, ranging from sea-level up to at least 1750 m but also recorded in cultivation close to villages; reports of altitudinal preferences now considered to be unsubstantiated.

Not well documented. Buru Racquet-tail Calls include a variety of rather melodious whistles uttered in short phrases or repetitions of a single loud whistle, e.g. “whee-o-eew…whee-o-eew…” (somewhat reminiscent of a drongo Dicrurus). Also more metallic short notes such as “peek!”.

Dec–Feb. Nest in a hollow limb or hole in a tree. Five young in one nest included one large, fully feathered bird and one small, entirely down-covered hatchling. 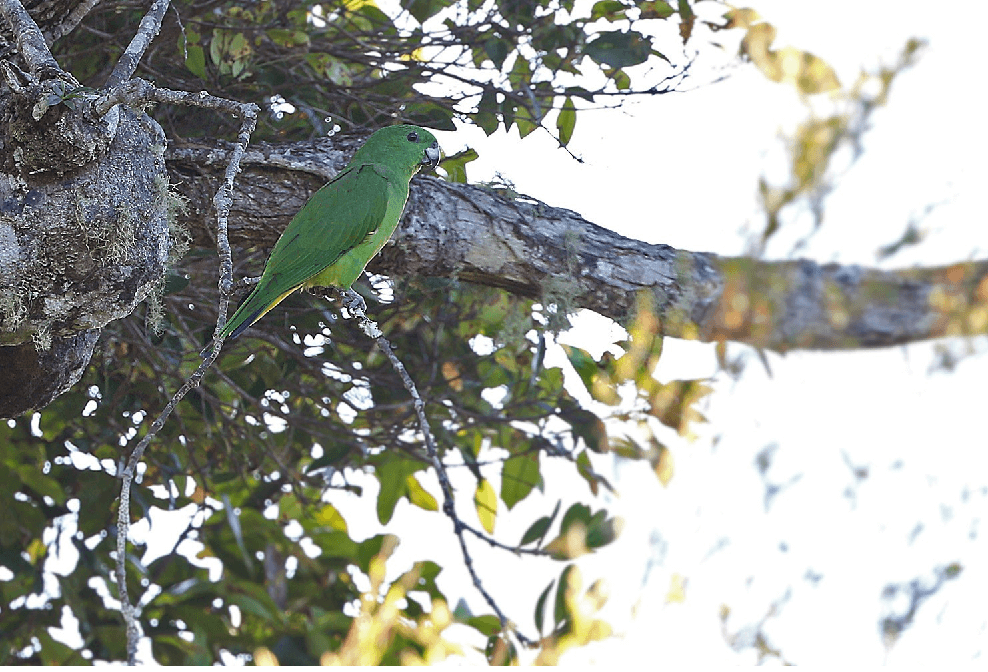 Not globally threatened. CITES II. Currently considered Near Threatened. A BirdLife “restricted-range” species. The mountains of Buru Racquet-tail remain well forested, there is apparently no trade in this species, and it was common and widespread, including in selectively logged forest, with flocks of 4–10 regularly seen, late 1989, and it was also common, in flocks of up to 16 Parrots, in 1995.