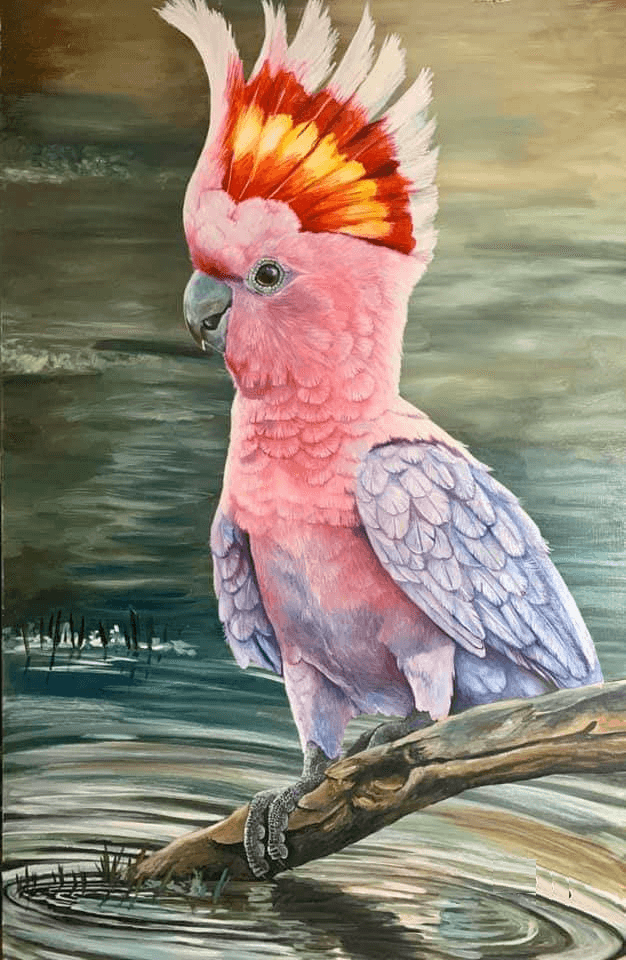 How to draw a parrot? Drawing of a parrot Start by drawing its beak, then draw its crest with three wavelets. Then draw a curve, and finish this curve with three small waves.
Then draw a line that starts from the crest to make its back, draw its wing, draw three lines there, and draw a point below with a line in it. In this article, you find all drawing a parrot technique.
Contents hide
1 How drawing parrot
1.1 Demonstration Drawing of a parrot
2 Easy parrot drawing
3 Templates
4 How to draw a parrot easy
4.1 Colorful parrots

Marie, in the series on animals …

Yes, we are going to make drawing a parrot. I found a beautiful photo. I think it’s a parrot but I admit …

Do not really know me so …

A magnificent exotic bird. What interested you in this subject?

Its shape was at first very slender, its disproportion also between the body and the tail which is very long, and then I found that it could be interesting to do in a rather graphic way with the felt pen.

With Marie’s gaze she detects us, she unearths great subjects for us each time. We go to work. 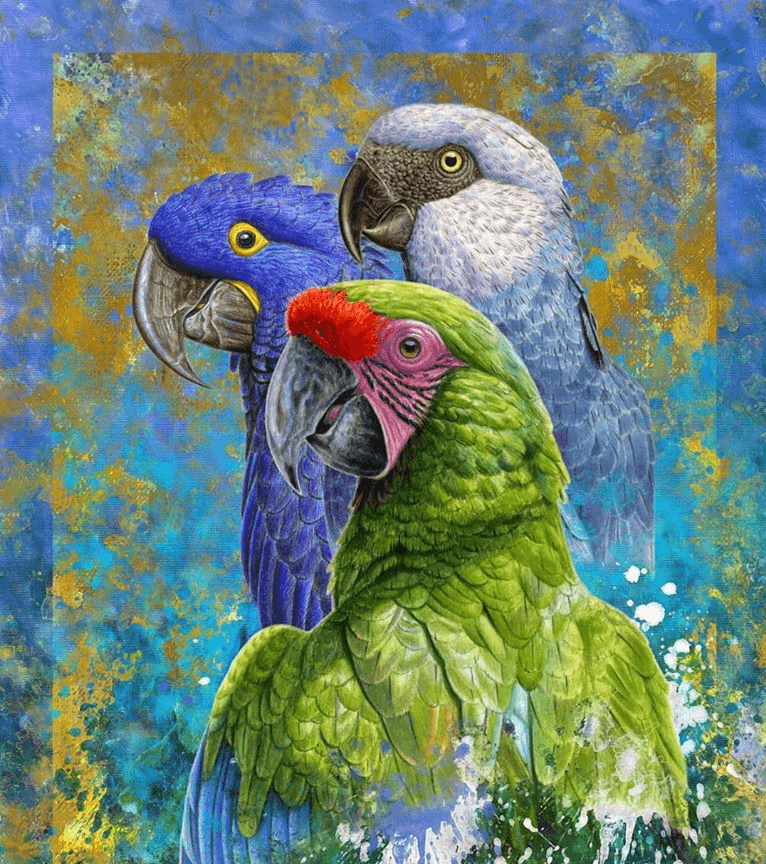 Demonstration Drawing of a parrot

Regarding the material, I will work with felt so I took a multi-technique paper which is very smooth and felt it is very good. I will start by making a sketch, placing the elements in pencil and then I will come to draw with felt.

The parrot, we are going to say that it follows a kind of diagonal so I will start with that by drawing the diagonal to have its tail here and it may be large. I’m not going to do that big because it’s going to belong.

So his tail here and his head here. Its wings are about a small half. We have about 2 and a half times the height, about that I think. You can also help yourself with tiles. From this diagonal, in fact, we have here the back which is vertical and we have the shoulders that come like that.

We have a wing here, the neck, the second shoulder which is there so its wings which come out in a sort of triangle a bit like that, and then we have the tail which is still very long. It has practically the same height as the feather which comes centrally. 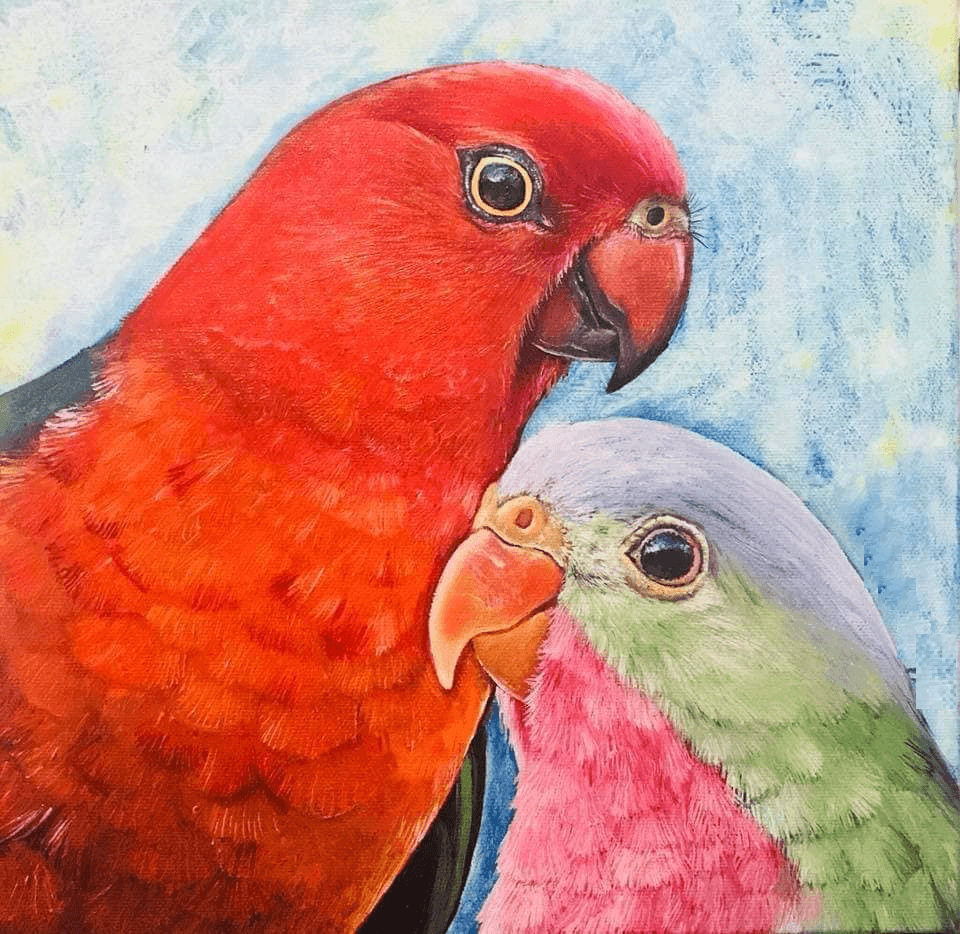 So for now it’s not very precise but I try to be not necessarily precise but to be correct in my drawing although we have the back. We’re going to put his head here.

I’m not trying to draw the right line the first time. I build so I put a lot of lines and it is my eye also at a given moment which tells me it is this line which is right or that one and therefore I refine a little bit at a time. You should not be afraid to put a lot of lines on this drawing, especially since then we will erase the lines that are too much.

Here is the beak therefore important the direction of the beak, this head and he has the eye which is there at the top, perched there. I’ll put the color spots on him. It will help me build.

I’m still going to put the main feathers in a bit and then I will go to felt fairly quickly.

Here the felt makes it possible to be a little stronger and also to play with the graphics a little bit of the felt so I will start with a 0.8 to mark the most important lines and then I will change the thickness of the felt. I’m going to start by putting the lines in the shade a bit.

And so I don’t just go back over my features. At the same time, I am trying to improve what I have done.

I’ll take a bit finer felt to start the head.

On this basis, I will erase my line now because in fact I hardly need it anymore.

There you go, and I’m going to come and work on my shadows, put values ​​on my parrot. To do this, I will work by trying as much as possible to be in the direction of the feathers. In fact, we have a whole part here that is in the shadow there When we weblink on the image we have a shadow here too so I’m going to put shadows, values ​​in fact here we have shadows here, a little bit here, trying to work my shadows in the direction of the feathers so you have to navigate all these feathers.

I will start with the most obvious, this one for example.

There I will stop. I still take a look to see if there is not a last little bit of felt here and there. I tried to have a good shade here on the side of the parrot. We can always go a little further. We always want to go further. Then you have to see if it’s useful or not, that’s always the question.

On the other hand, the support on which it is placed I really traced it in a very basic way. I really suggested it because in fact, it’s not the primary topic. I’m going to put a little shadow back here under the tail may be just accentuating a little bit there. What I did there with a felt-tip pen can also be done with a pencil, and therefore with a pencil,

we must not be afraid that we see the pencil line, or the graphics because there it tightens the drawing since it is done in the direction of the feathers. Here is.

Here it is, here is the beast. This is the end result. You will of course have it for download. Difficulties to anticipate?

Difficulties, pay attention to the proportions because in fact what is interesting is this very long tail. I think the same with a shorter tail is less elegant.

Arrange so that it fits into the sheet. It seems obvious like that but we sometimes have surprises, and then it’s playing with the graphics to create shadows and lights while respecting … This rendering of the pen there.

Yes, that’s it. The shadows and the light must at the same time render the graphics of the pen a little.

And it is indeed the case.

Drawing of a parrot material: How to draw a parrot easy

Check out our parrot painting selection for the very best