Shout to be heard

Screaming is the first form of innate communication for the parrot. Whether in nature with its congeners or with us in our homes, a screaming parrot ( read howls ) always tries to communicate, to express something.

If bonding calls to keep in touch are part of the bird’s innate behaviors, the vocalizations that compose them will be acquired. These will be part of the individual baggage of the bird and will depend on what it learns and retains from the environment in which it will evolve, according to the answers it obtains. Many different modulations and sounds will thus be assimilated ( if they are relevant, if they allow communication ) in order to be able to maintain close relations with the group.

It is in the nature of the parrot to want to communicate by vocalizations and it is therefore normal that this acquired part of liaison calls is also transposed in a context of domesticity.

He will learn the everyday, familiar sounds that serve to attract attention, stay in touch or communicate a desire or frustration and will naturally remember … those that work well ( for him ).

The parrot expresses itself and you must try as best you can to decipher this language by understanding that it is a call, a communication, and trying to understand what your bird is trying to notify you … No small task! If you ignore these vocalizations it may escalate and that’s when the link calls will turn to screams, what am I saying – link howls.

There are a multitude of sounds ( calls ) that define your parrot’s moods. The modulation of the call or cry will be different depending on the circumstances or the emotions involved. 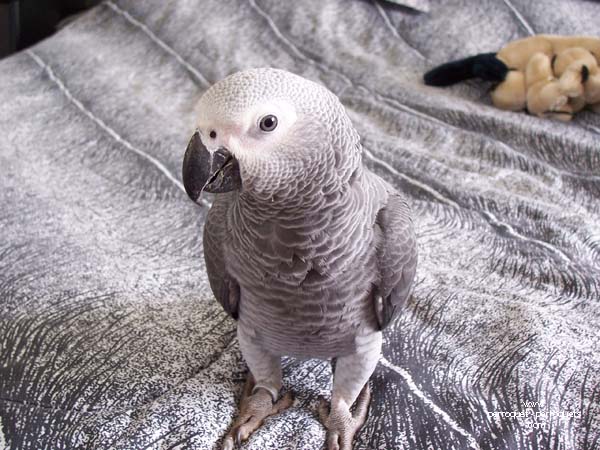 These calls, which are used in normal situations, can quickly escalate depending on the responses you offer the bird. Indeed, as an intelligent animal, the parrot runs the risk of quickly understanding how it can influence the behavior of those around it … to its advantage, by using strategic sounds in order to receive benefits. Make sure you send your parrot the right messages, the ones you want them to remember … Many parrots learn pretty quickly to get what they want from their human by howling, since some people would do anything to do it. silence the bird by giving it exactly what it wants the moment it runs. Indeed,

Usually, the parrot does not cry for nothing. There is always a reason ( at least, according to his point of view ), all his actions resulting from very specific motivations. Sometimes it can be difficult for us to discern what makes our bird squeal: what may seem very harmless to us may have a whole other dimension for our parrot. A sporadic squeal is perfectly normal, remember that it is an innate means of communication and that even the most socialized of parrots will occasionally use this means as a link call to locate you. At that moment, a simple answer, such as: “I am in the kitchen”, will know how to satisfy your bird, as long as you have taken the trouble to show him around and know his territory beforehand.

The important thing here is not to unduly reward this behavior by giving the bird the desired attention. If we react to this kind of behavior either by shouting at him more beautifully or by responding in a positive way in his eyes ( coming towards him, offering him a treat to silence him, and … etc. ), we confirm it in this attitude and he will only retain that: if he wants attention ( or anything else ), he has only to express it loud and clear!

Of course, you have to put things in perspective. Whether it’s a very young parrot or a crying baby, the situation calls for immediate attention – a cub never screams for nothing; on the other hand, your reactions to a behavior of this kind coming from a more “experienced” parrot will require more reflection on your side before making THE unfortunate gesture … Only a poorly socialized parrot, “insecure”, anxious, dissatisfied, even overwhelmed, will cry loudly, persistently, repetitively for no apparent reason or even because he does not know how to react in the face of even the most mundane situation. Up to you!