In the past was frequently placed in separate genus Geopsittacus. Monotypic.

Interior of W & C Australia, were likely widespread in the 19th century. Presumed extinct for decades, but carcasses were found in NW Queensland (near Boulia in 1990 and Diamantina in 2006),

three individuals were reported in the Pilbara region (Western Australia) in 2005, other possible sightings were made in several regions, and photographs of a live bird were obtained in 2013.

Possibly a very scarce and cryptic species that could occur, inland, anywhere from Western Australia to W Queensland and NW New South Wales.

Not all recent sightings have been in spinifex plains, which may only be used when seeding; patch burning to create firebreaks, allowing mature spinifex to develop in a mosaic, appears to have created favorable conditions.

A radio-tracked individual made regular and predictable nightly movements up to 7 km away from its day roost in dense spinifex, across and into non-spinifex habitats, including chenopod-dominated systems on stony plains, and perennial grasslands on alluvial deposits.

Possibly a wanderer, possibly sedentary, perhaps depending on locality or climate; reported in the past that numbers fluctuate with the season, and the collection of 16 specimens in N South Australia in the 1870s may have reflected a local irruption, possibly reflecting favorable climatic conditions or displacement from newly settled stock lands elsewhere.

The notion that night parrots move seasonally between spinifex grassland and chenopod shrublands determined by spinifex seed availability is not borne out by recent records.

night parrot Seeds of spinifex were found in one specimen. In a recent sighting, circumstance suggests feeding on seeds of Enneapogon purpurascens.

The night parrot australia call is a “ding-ding”, reminiscent of the notes of a Bell Miner (Manorina melanophrys), and is usually emitted in the first hour after sunset; there is also a short, frog-like “grriet”, sometimes given as a single note and at other times repeated.

A night parrot nest is a platform of sticks on or near the ground in an enlarged cavity tunneled into a dense tussock. Eggs reportedly 4. 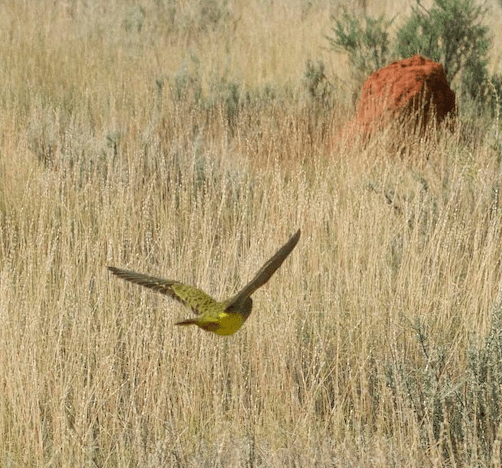 ENDANGERED. CITES I. Habitat degradation caused by altered fire regimes and livestock grazing, compounded by predation by introduced cats and foxes and possibly by reduction of water availability due to camels,

may all have contributed to the decline of this species, although clearly its nocturnal habits and inhospitable habitat greatly obscure an understanding of both past and present status.

A second corpse, of a young female, was found at Diamantina National Park, Queensland, in 2006; three birds were reported from the Pilbara region of Western Australia in Apr 2005, with three further sightings in 2010.

The first photographs of a live Night Parrot, taken in Jul 2013 in Queensland, were published later that year. The location of this site remains confidential but is now protected by a 56,000 ha private reserve ABC news:

Night parrot conservation reserve created in Queensland for endangered and elusive birds. In 2015 an individual was captured and afterward radio-tracked for a few days.

Given recent records, it is estimated that there might be 50–250 birds in total  It may still occur elsewhere in its former range, but the population is assumed to be very small and possibly subject to extreme numerical fluctuation.

Considered Critically Endangered until 2012, recent sightings appear to indicate a larger population than previously suspected and it has therefore been downlisted as Endangered.

Recent records suggest that sensitive land management, with patch burning of spinifex, moderate livestock densities, and low levels of exotic predators, may contribute to the conditions under which birds survive.