DISTRIBUTION Formerly occurred on Norfolk Island and nearby Philip and Nepean Islands, in the Tasman Sea; now extinct.

STATUS Hume and Walters (2012) note that the first mention of the Norfolk Island Kaka was made by J.R. Forster on the second voyage to the South Pacific by Captain James Cook, after the discovery of Norfolk Island in 1774.

The first European settlement on the island came in 1788 with the establishment of a penal colony that persisted until 1814,

and I suggest that references to both parrots and paroquets in the writings of visitors to the island during this time can be interpreted as differentiation between the Norfolk Island Kaka and the Red-fronted Parakeet Cyanoramphus novaezelandiae by these writers.

In a letter written from Norfolk Island on 28 October 1788, and printed in The Kentish Gazette at Deal, England, on 6 June 1789, it is stated:

The wild fowl are pigeons, quails, doves, plovers, corlieus,
parrots, paroquets and a black bird with a web foot that
burrows in the ground, with a great variety of smaller birds

In a letter written in August 1790 by a non-commissioned officer on Norfolk Island, there is a clear differentiation between the parrot and the paroquet:

There is some little variety of birds. A Parrot, Paroquet,
Pidgeon, Dove, Hawk, and Owl, with many small birds. The
Parrot is very curious; the Paroquet common, with no great
share of beauty; the Pidgeon beautiful; the Dove delicate; the Owl and the Hawk quite common. In an account from 1793, it is noted that Lieutenant King found the parrots to be ‘….numerous, and the ugliest bird of the kind that I ever heard of; this added to the harshness of their voice, makes them a very disagreeable bird’ (in Tennyson and Martinson 2006).

After the loss of HMS Sirius at Norfolk Island on 19 March 1790, Captain John Hunter was marooned on the island until February 1791, and during that time he made drawings of ‘birds, flowers, and fishes.

Included among these drawings are figures of extinct Norfolk Island (Nestor products)Ground-Dove Alopecoenas norfolkensis and Norfolk Island Kaka and, having been made by an artist who observed living birds on the island, they are the only known visual records of these birds (see Groom 2012).

A second penal settlement operated on Norfolk Island between 1825 and 1854, and it seems that the Norfolk Island Kaka(Nestor products) disappeared before or soon after the establishment of this settlement.

Notes on 11 of the more conspicuous birds on Norfolk Island were made by Ensign Abel D. W. Best, who was stationed on the island between August 1838 and some time soon after 11 April 1839, the date of the last entry from Norfolk Island in his diary.

A diary entry by Best noting that he shot ‘five or six Lowries’ in the bush at Ball’s Bay on 21 September 1838 can be interpreted as referring to Red-fronted Parakeets or introduced Crimson Rosellas Platycercus elegans, but no mention is made of the larger parrots.

Moore (1985) points out that we may draw some conclusions from a lack of any reference by Best to species that might reasonably have been expected to attract his attention.

It seems likely that he would have observed and commented on the Norfolk Island Kaka had it been present, and his lack of reference to it probably suggests that it was already extinct, at least on Norfolk Island.

Gould (1865) refers to its reported survival on nearby Philip Island after having been extirpated on Norfolk Island: I regret to state that the native haunts of this fine bird have been so intruded upon, and such a war of extermination been carried on against it,

that it is now entirely extirpated, and a few stuffed specimens are the only mementos of its having existed. Until lately it still lived on Philip Island (an islet lying off Norfolk Island), but in this small domain, it is no longer to be found.

Although there is no supporting evidence of its survival on either Philip or Nepean Island after its disappearance on Norfolk Island,

I have no doubt that the parrots would have moved freely between all three islands, which are only a few kilometers apart. Norfolk, Philip, and Nepean Islands are not large islands, so I suspect that numbers of large, presumably long-lived Norfolk Island Kakas never were very high, being determined by available food resources and nesting sites.

Moore points out that considerable adverse impact on native birds occurred during extensive modification of the island while it was a penal colony, with much of the area being cleared for building and for agriculture, and the remainder indirectly affected by the deliberate liberation of domestic animals.

Feral cats were well established by the time of Best’s arrival, and he reports hunting them with dogs.

In common with other large birds on the island, notably the Providence Petrel Pterodroma solandri and ‘Wood Quest’ or Norfolk Island Pigeon Hemiphaga novaeseelandiae spadicea,

these parrots would have been killed for food by convicts and early settlers, especially after the wreckage of HMS Sirius when there was an acute shortage of food. Tennyson and Martinson highlight the ease with which the parrots were killed:

A hunter ‘would invariably find them on the ground’ but, although they were ‘very curious’, they would retreat by
running to Norfolk Island pine trees (Araucaria heterophylla) and ‘haul themselves up by the bill’. There they would ‘remain till they were shot’. 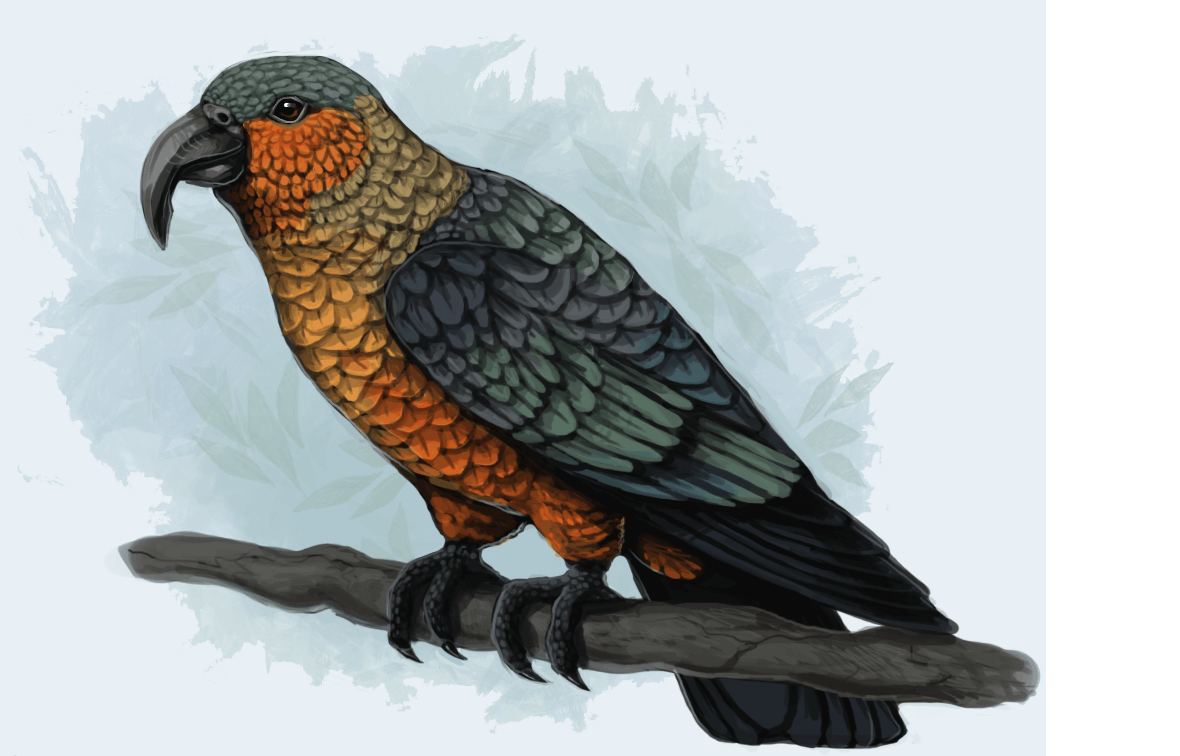 Such intense hunting, coupled with an extensive clearing of the native forest and predation by feral cats would have brought about their early extinction.
At least one of the museum specimens has a grossly overgrown upper mandible, prompting Flannery and Schouten
(2001) to speculate that this may have resulted from inbreeding in a small population.

I suggest that a more likely explanation is that it occurred in captive birds held in less than satisfactory conditions not allowing natural abrasion of the mandibles by chewing into wood or rubbing against rocks.

Some birds were kept as pets and, according to Greenway (1967), the last living bird died in captivity in London sometime after 1851.

This species is said to have been a forest bird like the very closely allied New Zealand Kaka Nestor meridionalis (Greenway 1967). Gould was informed by Mrs. Anderson that on Philip Island it ‘was found among the rocks and upon the loftiest trees’.

Virtually nothing is known of the habits of Norfolk Island Kakas (Nestor products), though presumably they closely resembled habits of the closely-allied New Zealand Kaka Nestor meridionalis.

Early reports refer to their being tame or ‘very curious’, and to rarely using their wings ‘except when close pressed’ (in Tennyson and Martinson 2006).

While in Sydney in 1839 or again in 1840, Gould observed the behavior of a captive bird, and on another occasion saw a captive bird in England, recording both encounters as follows:

During my stay in Sydney, I had an opportunity of seeing a living example in the possession of Major Anderson and
was much interested in many of its actions, which were so different from those of every other member of its family, that I felt convinced they were equally different and curious in a state of nature.

This bird was not confined to a cage but permitted to range over the house, along with the floors of which it passed, not with the awkward waddling gait of a Parrot but in a succession of leaps, precisely after the manner of the Corvidae.

Mrs. Anderson, to whom I am indebted for the little I could learn respecting it, informed me that it was found among the rocks and upon the loftiest trees of Philip Island, that it was so tame as to be readily taken alive with a noose,

and that it fed upon the blossoms of the white-wood tree, or white Hibiscus, sucking the honey of the flowers: the mention of this latter circumstance induced me to examine the tongue of the bird, which presented a very peculiar structure, not, like that of the true honey-feeding Parakeets (the Trichoglossi)

Anderson told me that it lays four eggs in the hollow part of a tree, but beyond this, I was unable to ascertain anything respecting its nidification. I may mention that I once saw a living example of a bird in England.

It was in the possession of Sir. J. P. Millbank, Bart., who informed me that it evinced a strong partiality to the leaves of the common lettuce and other soft vegetables. and that it was also very fond of the juice of fruits, cream, and butter. CALLS The call was described as a ‘hoarse, quacking, inharmonious noise, sometimes resembling the barking of a dog’
(in Tennyson and Martinson 2006).

DIET AND FEEDING The ‘blossoms of the whitewood tree or white Hibiscus’ identified as food by Mrs. Anderson in her comments to Gould presumably are the flowers of Lagenaria persona.

I agree with the remark made by Tennyson and Martinson that the size and strength of its bill suggest that the Norfolk Island Kaka (Nestor products) must have eaten other foods, and I am sure that, in common with the New Zealand Kaka, the bill was used to dig into dead or decaying timber to extract insects and their larvae. SPECIMENS AVAILABLE

Tennyson and Martinson (2006) report that fossil bones were recorded from Norfolk and Nepean Islands in the 1980s, and excavations at a prehistoric archaeological site at Emily Bay, on Norfolk Island, in 1996 and 1997 recovered 21 bones representing at least three individuals. In total there are fossil remains of at least nine individuals.