The Orange bellied Parrot Female has a weaker, greener line on the forehead. Immature duller than female, with a smaller orange patch on the belly. 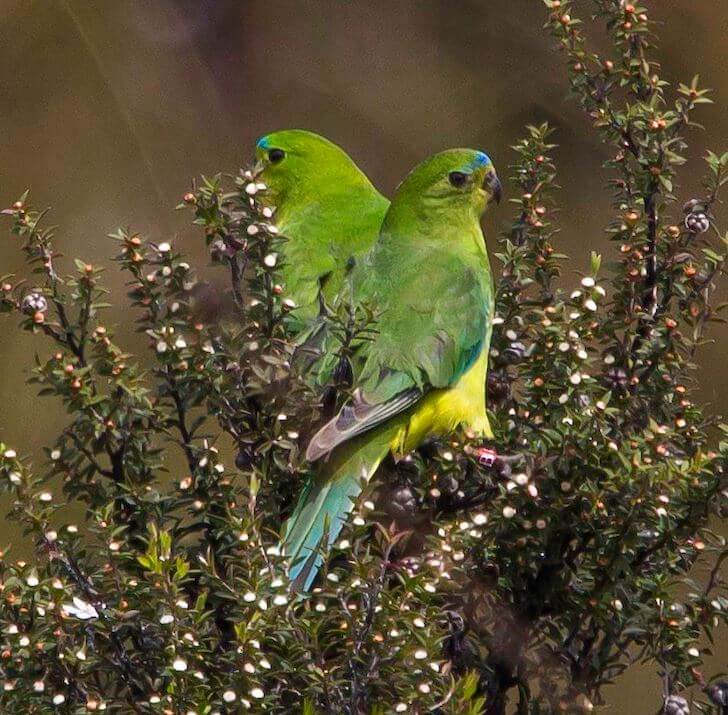 Inbreeding season, favored sites are within 50 m of creekside or lagoon vegetation, where sedge lands adjoin open expanses of matted tussocks or button grass, with nesting in small adjacent copses.

Orange bellied Parrot forage on heath dominated by buttongrass  (Mesomelaena sphaerocephala), mostly in areas burnt within the past 15 years.

In winter, saltmarsh is much used, especially where Arthrocnemum arbuscular, Salicornia quinqueflora and Suaeda australis dominate, but also dunes and, apparently in times of shortage, open scrubland, paddocks, pastures, and even golf courses.

After breeding Orange bellied Parrot  in SW Tasmania, birds move N in Mar–Apr through Bass Strait islands, notably King I where some birds stop over Apr-Jun and a few remain throughout the non-breeding period,

but most winter from late May to early Oct on the SE Australian coast between the Coorong and Gippsland, the majority of the tiny population concentrating at Port Phillip Bay and the coastal dunes between Kingston and the Victoria border.

Initially in summer, seeds of sedge land plants such as Lepyrodia tasmanica and Restio complainants, then seeds of Boronia citriodora, B. parviflora, Helichrysum pumilium, Actinotus bellidioides, and button grass.

Orange bellied Parrot Calls include short buzzy chatters, both when perched and on flushing. Also a high-pitched “seet” and several short subdued twitters and tinkling notes. The captive population of 60-170 birds is held in three locations. Destruction and alteration of vegetation combined with competition from other species and trapping of birds in winter quarters are blamed for the decline in the Orange bellied Parrot,

which was clearly more numerous around 1900 and apparently so even in the 1960s, and which appears to achieve good recruitment on breeding grounds; there is also evidence that disease may have played a role.

A recovery program focusing on winter habitat protection and restoration is underway, with particular input from the petrochemical developers (since 1978) of Point Wilson, in Port Phillip Bay. Without the protection of nest sites, this species would likely be extinct.