the area from the upper mandible to behind eye buffy green; chin, lower cheeks, throat, and upper breast pink; lower breast to belly olive yellow-tinged greyish blue between thighs, with some pink on thighs; 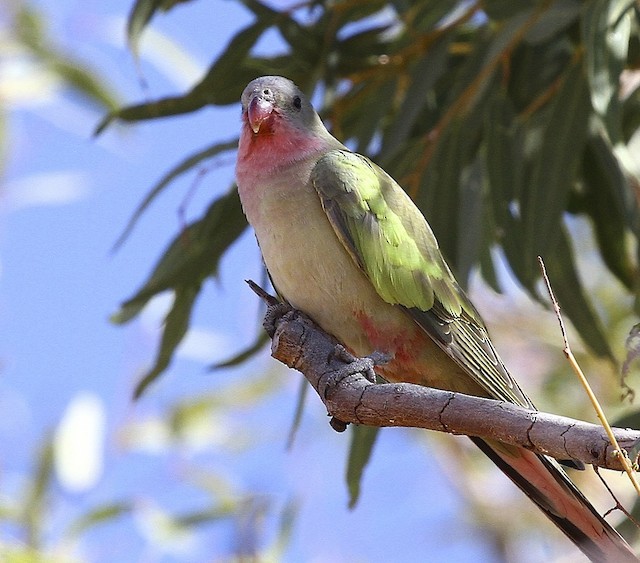 Interior W & C Australia. Irregular in most of the range, with probable core areas around L Tobin (NC Western Australia) and the Great Victoria Desert.

Sandy deserts with hummock grassland of Triodia and Plectrachne, usually with a shrub layer, stands of Casuarina in the sandy country, Acacia scrublands, and eucalypts, notably Eucalyptus camaldulensis, bordering watercourses, this last commonly used for nesting. 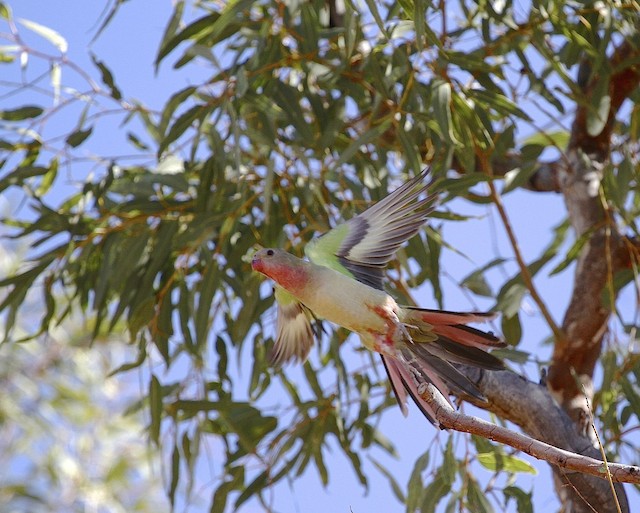 Irruptive and/or nomadic; recent analysis suggests a core population around Lake Tobin, in the east of the Great Sandy Desert, from which birds range out far more widely over several years when conditions permit.

Not well documented. The commonest vocalizations are a loud “krreee” and a sharp “queet”. Also quiet chirrups and lower-pitched notes when feeding.

Recorded Sept-Dec, but dependent young also seen in Jul; probably at any time of year after rainfall. Nest in hollow limb or hole in a tree, usually a riverine eucalypt but sometimes Casuarina; sometimes colonial, with up to 10 nests in one tree.

During a population irruption in S Northern Territory, at least 21 active nests were detected in Aug–Nov and one in Jan; all in mature Eucalyptus gongylocarpa, with entrances at c. 6·5 m above the ground on average (range 4·4–9·9 m). Eggs  4–6; incubation lasts c. 21 days. Not globally threatened. Currently considered Near Threatened, and previously, Vulnerable. CITES II. Population is very difficult to assess in a very scarce, apparently nomadic species with a large range;

possibly no major decline but the decline and extinction of other sympatric non-avian taxa, and the absence of records of large numbers since 1963, caused concern; in Jul 1993 almost 300 were counted in one part of the Lake Tobin area.

Possible that man-made changes to its habitat may have favored more water-dependent competitors. No fewer than 25,000 were held in captivity in Australia.