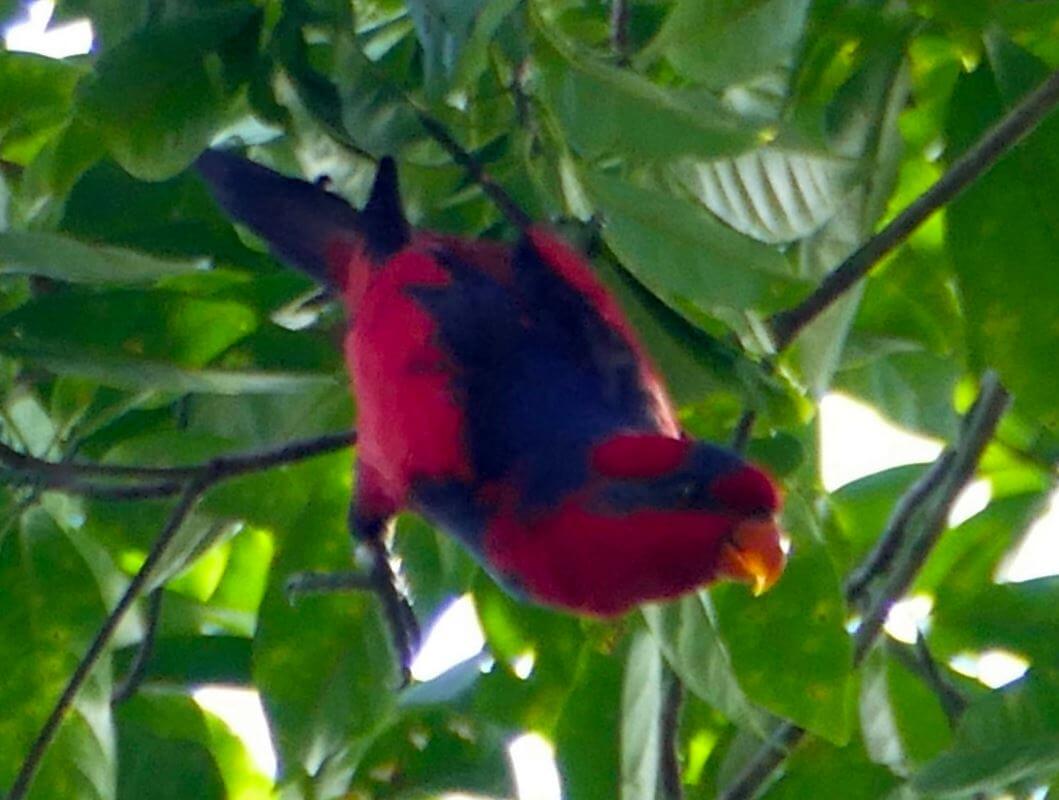 Red-and-blue Lory 31 cm. Red, with an orange bill and purplish-blue patch on the mid-to hind crown and broad line from around eye downside of neck to mantle; breastband, mantle and back purplish-blue; scapulars, flight-feathers and thighs black; wing-coverts tipped black; tail reddish-purple above; legs grey. Size differences between the three races have been disputed, and challengeri might represent non-adult specimens of talautensis.

Proposed race challengeri no longer regarded as valid: apparently known only from type specimens, purchased at sea from local canoes purportedly coming from Miangas Is (extreme N Sulawesi subregion), although probably from Nenusa Is (closer to Talaud Is), but birds may have originated from neither, and now thought probably to have been either dispersing or introduced;

these specimens may have been immatures of talautensis, and characters of size and plumage appear to overlap with this race; if the two names prove to be synonyms, name challengeri would have priority; further study required. Two subspecies are currently recognized.

Talaud Is (now almost exclusively on Karakelong; at least formerly on Salebabu and Kabaruang).
SUBSPECIES

Sangihe Is, but probably now extinct.

Forest and edge, visiting coconut plantations and other open areas to feed.

Local people report an influx of up to 150 birds each year on Salebabu, Nov–Mar, and large groups have been observed flying between islands elsewhere too.

Gives harsh screeching and whistled notes in flight and when gathering at roosts, but is usually quiet while feeding.

Main period, Talaud, Apr-May, but also Nov–Dec; latter is reportedly main period on Sangihe. Nest in a hole in a large tree (once a Canarium at 30 m above ground) in both forest and cultivated areas. Eggs are usually two.

Owing to extensive habitat loss and trade exploitation, the Sangihe population may now be extinct(no sightings in the late 1990s) and it seems likely that the majority, if not all, of the birds seen in 1995 were escaped, or more likely released,

cagebirds brought to Sangihe from the Talaud Is; the tiny, deforested Siau and Ruang cannot now hold viable populations.

Of the three Talaud Is, the species is extinct on Kabaruang, small numbers survive in the primary forest on Salebabu, while on Karakelong it is still common in the N (communal roost of 400 observed, and another of 500 reported), less so in the S.

The trade continues with c. 800 birds thought to be exported per year; 111 birds were confiscated from one Philippine trader in Oct 2013, 55 of which survived and were released into the wild in 2014.

The status of the doubtful race challengeri is completely unknown, but if a population ever really existed on the Nemusa Is, it cannot be large and may even be extinct;

the species was not known to local people in 1995 and 1997, by which time the islands were entirely covered by agricultural plantations and scrub, without any extensive areas of forest.