Everything you need to know about Timneh parrot (Psittacus Erithacus)

Character: Very intelligent birds able to talk and who can be very affectionate towards their owner or between them requires a lot of attention in order to avoid the boredom and the problems which result from it

The woodpecker is mainly black, but it has an ivory or pink color in the upper third of the upper jaw.

There is no visible difference between a male parrot and a female parrot.

The youth have black eyes which become yellowish cream at the age of two years.

Smaller than the Gray Parrot

Sound of the Timneh Parrot. 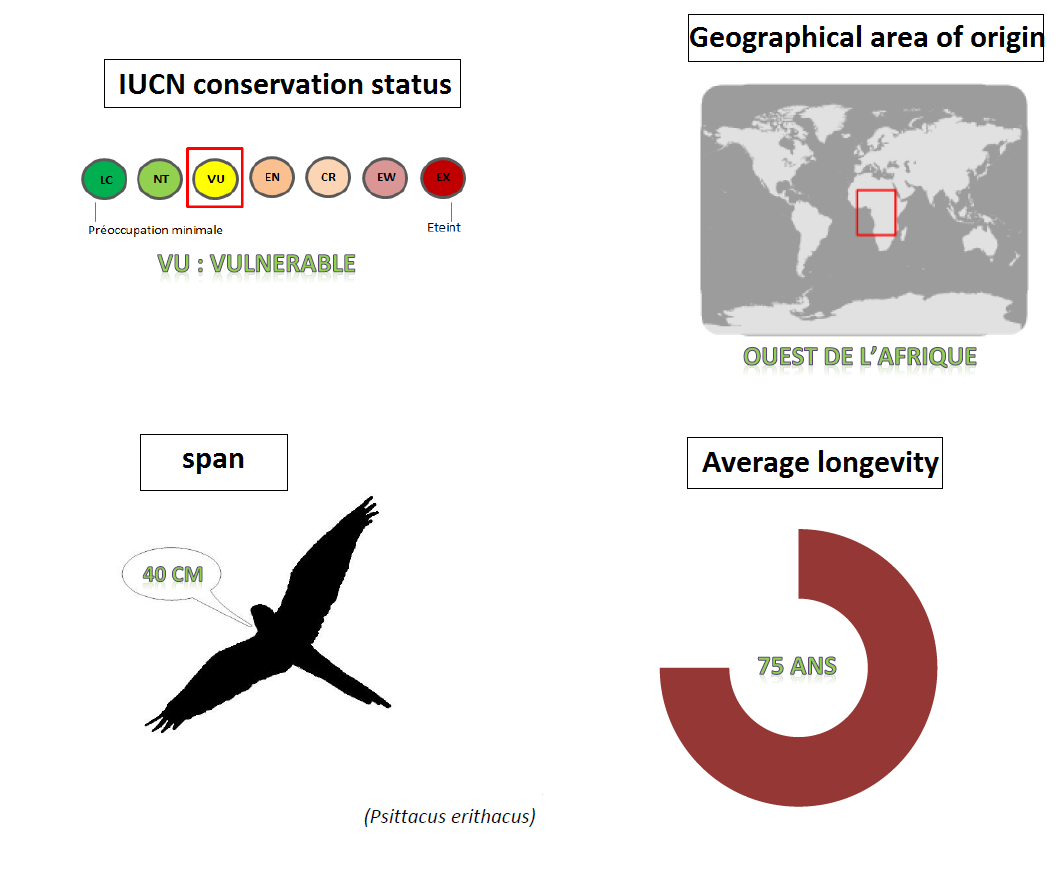 Although normally populate dense forests, they are also generally seen at the edge of forests, clearing, gallery forest, mangroves, tree leaves, cultivated areas, and even gardens, although it is not clear whether c are self-sufficient populations.

You can make seasonal trips outside the drier areas of its distribution in the area of ​​the dry station.

Sometimes travel long distances for food. timneh parrot nest in hollow trees high above the ground. Found in small strips of a few dozen, usually no more. Flocks of birds can be noisy.

Little known difference in regard to the Gray Parrot.

The breeding season is generally from November to April in the more westerly regions of West Africa, probably, especially during the dry season.

In the wild, the Timneh Parrot eats seeds, nuts, fruits, and vegetables. instead of flying, they climb trees, to find food and keep it with one leg while eating. They like to eat external walnut meat from palm oil, and eating snails have been observed.

In West Africa, his hobby is known for pearls, attacking cornfields, and coming to be considered harmful in certain places. They are distributed in the west, in the wetlands of Upper Guinea, and along the savannas of West Africa From Guinea-Bissau, Sierra Leone, and south of Mali to the east of Côte d’Ivoire, at least 70 kilometers east of the Bandama River.

The wild population is distributed with the nominal species in Abidjan, Côte d’Ivoire.

(Fraser, 1844) – Nominal. Southern Guinea, Sierra Leone, and Liberia, as well as the western part of Côte d’Ivoire. There are also small groups Guinea Bissau and Mali. populations Senegal They disappeared the fish trade.

Its population is estimated between 100,000 and 500,000 exemplary and decreasing.
P. Erithacus, before the timneh division, was placed in Appendix II of CITES with all the Psittaciformes in 1981 at the request of Switzerland and Liechtenstein.

Due to concerns about the effects of a large number of these species traded, it was the subject of a review of significant trade in CITES, which was listed as “possible problems” (Inskipp et al. 1988).

Legal trade controlled by CITES It can represent only a small proportion of the total number caught in the wild.

The species is found in a number of protected areas.