Do parrots love their owners What are the affectionate relationships between men and parrots? Do parrots love their owners? The most beautiful thing about owning a pet parrot is the attachment experience. Once you trust and care about each other, feelings will evolve. It is therefore likely that you are curious about the dynamics of relationships between parrots and humans.

Parrots can attach themselves to their owners because they are very intelligent like African Grey Parrots, and Amazon Parrots, Cockatoo Parrots, Eclectus Parrots, Cockatiel, Macaw Parrot, and Quaker Parrots, Senegal parrots are long-lived Parakeet Lifespan, Parrot Lifespan, affectionate, and talkable birds. They build relationships on a higher level, treating you like a member of their herd. Parrots show affection by rubbing against each other, smoothing their paws, seeking attention, and getting excited when you enter the room.

Your Lovely parrot can sometimes develop a contact call just for you. He is able to distinguish humans from each other, which could cause your parrot to attach only to you. Some parrots are one-person birds. There are many ways to strengthen the bond with your lovely parrot.

Contents hide
1 How do parrots bond?
1.1 Can parrots attach themselves to people better than cats and dogs?
2 Can parrots recognize their owners?
2.1 How long do parrots remember their owners?
3 Can parrots miss their owners?
4 Do male parrots prefer female owners?
5 How do parrots show affection?
5.1 Hugs
5.2 Sleeping with you
5.3 Approaching you
5.4 Kisses
5.5 The Liaison Call
5.6 The little pecks
5.7 Small bites out of jealousy
6 5 Ways to Connect with Your Parrot
6.1 Stay calm
6.2 Patience
6.3 Move slowly
6.4 Know their preferences
6.5 Socialize
7 Do Parrots Miss and Remember Their Owners?

How do parrots bond?

Parrots attach themselves to humans by exhibiting certain character traits, including:

These traits are normally absent in creatures that cannot form strong bonds. For example, snakes do not show affectionate behavior or separation anxiety. Some animals do not recognize their owner, but only their smell.

It takes time, attention, and care to make that connection. Once the relationship is established, it usually lasts a lifetime.

Can parrots attach themselves to people better than cats and dogs?

Some owners believe that parrots bond stronger with humans than dogs or cats. It was noted that parrot owners considered their relationship “superior to that of cats and dogs.”

Of course, the depth of a link depends entirely on the time and effort invested in that relationship. The bond with your parrot may be more significant for these reasons:

Another study conducted found that parrots were mentioned in the obituaries of their owners.

Can parrots recognize their owners?

There is no formal scientific study that proves that parrots can recognize their owners. However, studies have hypothesized that birds can recognize humans.

This study found that mockingbirds can distinguish one person from another. A nest was disturbed for 4 consecutive days by the same person. The birds increased their aggressiveness against this person over the days.

A second person approached the nest and threatened it in the same way. The response decreased significantly. The researchers concluded that birds could distinguish one person from another and quickly. The birds needed only 2 to 30 seconds with someone to recognize this individual in the future.

It is reasonable to assume that parrots also possess this characteristic. They demonstrate a higher degree of intelligence than mockingbirds in several key areas. Parrot owners often find that their birds are suspicious of people they do not know.

How long do parrots remember their owners?

Beyond recognition, there is evidence that proves that parrots have long-term memory. According to studies, birds remember things for up to 3 years. The researchers determined this by studying the cries of a family of crows.

The crows’ cries were very different, depending on whether or not they knew the raven on the other end. Even though the birds had not seen each other for more than 3 years, the calls were still memorized, remembered, and used.

Can parrots miss their owners?

There is no scientific evidence that parrots can miss their owners. However, we can turn to anecdotal evidence from the owners themselves. Many owners claim that their parrots:

Parrots are intelligent animals. Although they are not human beings, they feel emotions. They can feel sadness and happiness. Judging by the testimonies, parrots miss their owners.

Some owners think that their parrots prefer one sex over another.

However, there is no scientific evidence that parrots can determine the sex of a person. What we do know is that birds are able to recognize people and form long-term memories about them.

If you notice that your parrot prefers men to women or women to men, it may be because your parrot recognizes some characteristics common to sex. For example, if your parrot avoids women, it may have had a bad experience with a previous long-haired owner.

If your parrot seems to show a preference for a man or a woman, this is a learned behavior. For example, a male parrot may have spent more time with female owners, pet store employees, or breeders.

Since it is a learned behavior, it can be forgotten and unlearned through training and socialization. How do parrots show affection?

Parrots can form strong bonds with their owners, in a way that resembles love. However, parrots show their love differently than other pets. Here are some signs of attachment:

Parrots are animals of prey that defend their personal space and vulnerable areas of their body.

When a parrot chooses to snuggle up to you or other birds, it shows great confidence. The trust of an animal of prey is not given lightly and should be considered a sign of sincere affection.

In addition, parrots cuddle to warm up. Cuddles allow parrots to share their body heat with other parrots in their herd. If they are willing to share their warmth with you, they trust you in their personal space.

A well-domesticated parrot will understand that hugs earn him the caresses of a loved one. You can pet, pat, or cuddle your parrot if it snuggles up to you. To receive this affection, the parrot will snuggle up to you.

Sleep is a vulnerable state for parrots as they need to stay alert for anything that could harm them.

Some parrots sleep with their eyes open. For this reason, you should feel grateful if your parrot sleeps near you. It is a sign of affection between birds, and your parrot considers you one of its own.

You are tall and, for all intents and purposes, a predator. However, the parrot overcomes generations of prey behavior ingrained in its brain to rest on you.

An unbound parrot can tolerate the presence of a new owner. He can eventually resist and move away from you if you try to pet him. However, a bound parrot will actively seek the company of its owner.

If your parrot approaches you on its own, it is a sign of confidence. This is even more true if you don’t offer food, treats, or pets. The parrot’s desire to be in your presence means that it:

Parrots do not have lips, but they give kisses. This is done as follows:

An untrained parrot will never exhibit these behaviors. An erect parrot may also refuse to kiss other people, even if it is friendly with them.

This type of affectionate manifestation is rather reserved for people with whom he feels closely connected. Why do parrots kiss? This behavior is not fully understood, but there are theories, such as:

Parrots are aware of the dangers that threaten their faces, and their eyes, throat, and beaks will be at hand.

The liaison call is for a bird to make a quick call to locate its family members. According to The Royal Society, birds may have dialects present in their liaison calls.

This means that you are part of his “family”. Your parrot will develop a binding call just for you. It’s not to ask for food, attention, or treats. On the contrary, your parrot will only use it to ask:

If your parrot doesn’t see you or hear from you, he will continue to call. The scream will also be louder, in the same way, that humans shout louder when not heard.

If you notice that your parrot is doing this, respond by screaming or putting yourself in his field of vision. Better yet, give your bird a pat on the head to show that you appreciate that it ensures your well-being.

Not all bites are synonymous with aggression. If parrots bite to ward off predators or show fear, they also bite as a sign of affection. This will be more common in affectionate parrots.

Your parrot will gently bite your cheek, neck, or arm.

Small bites out of jealousy

Bites can also be due to jealousy. In this case, the parrot will bite you slightly when you show affection to other animals, birds, or humans. These jealousy bites are a sign that your bird loves you very much.

However, this is not always the healthiest behavior. As in all relationships, you need to set boundaries. If your parrot bites you when you are in contact with other people or pets, you must do so:

Training and training can help your parrot understand that this behavior is undesirable. 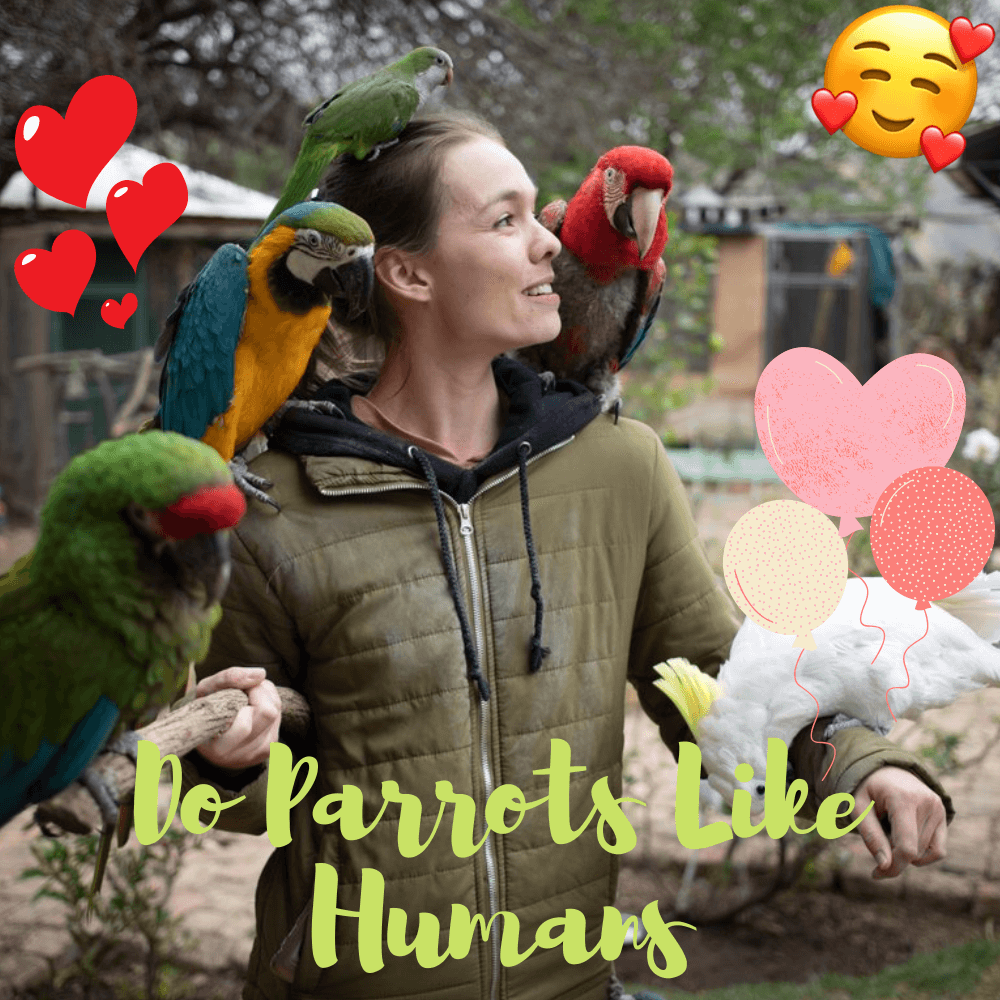 5 Ways to Connect with Your Parrot

Incorporate these steps each time you interact with the parrot:

Parrots are usually on alert and react strongly to loud or surprising noises.

Approach your parrot quietly. Avoid shouting or speaking in a loud voice, especially if it is perched on your shoulder. This calm and controlled behavior will allow the parrot to relax more easily.

Some parrots attach more slowly than others. When spending time with your parrot, be patient as the attachment process can take several months. Don’t try to force your parrot to love you.

Parrots can be frightened by rapid movements. Avoid rushing to your parrot or making sudden gestures. Parrots prefer slow, deliberate movements that allow them to evaluate who you are.

Each parrot has its likes and dislikes. Even if one parrot likes a toy or hugs, another may prefer another toy and love their personal space.

By observing your parrot and seeing what he likes, you can tailor your interactions to him. This will allow him to feel more comfortable and he will be more inclined to attach himself to you.

Your parrot can be easily scared, but that doesn’t mean he should always stay in his cage. Taking your parrot out of its cage is a wonderful socialization experience.

An easy way to socialize is to take the parrot to other parts of the house. Show it to close friends and family members, or watch TV together. If your parrot shows signs of