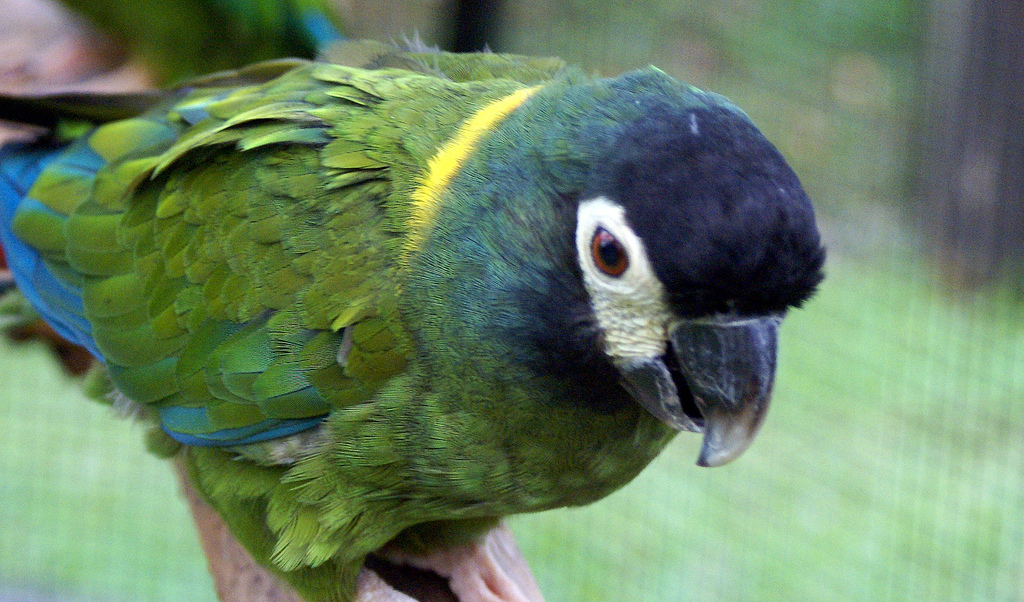 Golden collared macaw It is rather small (almost 38 cm) and agile macaw. Its plumage is very bright olive green, its face is bare and white, a large yellow collar marks its nape (hence its name), its wings are sky blue, its red tail with the blue tip, the black beak and the red irises 1.

The Yellow Collared Macaw is one of the smallest macaws in the world, it measures approximately 38 cm and weighs up to 250 g.

Its plumage is colored with different hues ranging from bright green to olive green and, as its name suggests, a large necklace of yellow feathers covering its nape and the feathers of its sky-blue wings.

Its face is white and featherless, its tail is red and at the blue end, its beak is black, its legs are pink and its irises are red.

In this macaw the forehead, the feathered part of the cheeks and the front of the hood are black-brown, turning bluish-green on the back of the hood and the sides of the neck.

All of the upperparts are green with blue bases on some feathers.

The underside of the wings is completely olive-yellow, except the flight feathers which are yellowish without luster.

The rectrices above the tail are reddish-brown at the base, green in the middle and blue at the tip.

The outer rectrices are mostly blue and the underside of the tail is dull yellow.

The juveniles resemble their parents but have a gray bill with a white culmen, irises and pale gray legs as well as a red-haired collar.

Golden collared macaw The Yellow Collared Macaw is found in the humid and tropical forests which cover the hills of the Andes, but also in the dry plots of deciduous trees and in the meadows dotted with trees and are also present at the edge of the trees and in the savannas.

Unlike most parrot species, they tolerate profound changes to their habitat very well and are relatively common in clumps of residual trees located in the middle of agricultural land and on the outskirts of large urban centers.

They occupy the north and east of Bolivia, the southeast of Mato Grosso, the north of Paraguay and the northwest of Argentina, as well as the provinces of Jujuy and Salta.

Another isolated population also lives in Brazil, straddling the states of Goias, Mato-Grosso, and Parà.

The Yellow Collared Macaw lives up to 40 years of age.

In-flight, the collared macaws emit powerful cries that resonate in European ears much like the cry of a laughing seagull.

In the event of an alarm, they also deliver noisy and harsh notes which are said to resemble those of the blue-headed horn (Aratinga acuticaudata).

Yellow-collared macaws generally live in pairs or small bands, even outside the breeding season, but larger gatherings can occur when food is abundant or when it comes to joining the dormitories common to the nightfall.

Among these very large troops, couples are much less noticeable than among the other macaw species.

Yellow-collared macaws look for food in trees and bushes but occasionally come ashore.

These birds have an agile, fast and direct flight.

In captivity, its diet is mainly composed of a mixture of parrot seeds and fruits and vegetables such as apples, poiress, bananas, cherries, melons, cucumbers, carrots, radishes, etc.

it is also possible to give them sprouted seeds.

The nesting season takes place in December in Argentina, the nest is located in a tree cavity sometimes up to 20 meters above the ground.

The female lays an average of 3 or 4 eggs which she will incubate alone for about 23 days, the young will leave the nest 2 months later however, the parents will still feed the young 2 weeks before the final weaning.

In captivity they will need a nest, the breeder will have to opt for a large barrel and make a flight hole of 20 cm in diameter or a wooden box.

You will need to put a fairly thick layer of peat mixed with wood chips in the nest.

The Yellow-collared Macaw reaches sexual maturity at about 6/7 years of age.

The species is not globally threatened in its natural state.

In the early 1980s, in Bolivia, the capture of birds for the aviary trade reached the worrying figure of more than 3200 birds per year but fortunately, the traffic was strictly prohibited from 1984.

The populations of Paraguay and northern Argentina were considered to be fairly small, but in recent years the trend has reversed, as the species has colonized new territories.