The Psittacus, The conservation status of gray parrots in the wild is considered “Vulnerable” by IUCN or the Union for the Conservation of Nature (Appendix II of CITES). This parrot, you will probably never meet him. This bird lives on the islands Principe and Bioko, but it is particularly difficult to distinguish it from our gray Congo parrot. The ornithologists who described it claimed that it was larger and darker (as washed in Indian ink) than Psittacus erithacus Erithacus. However, these characteristics have not always been consistent. Moreover, this bird would have moved and reproduced on the continent. It is therefore very likely that some gray Congo also moved in the other direction ie from the continent to the islands and therefore, Psittacus erithacus Erithacus and Psittacus erithacus princeps could in fact only the same subspecies.

Even today, with all the new technological possibilities, research is underway to study their possible genetic differences.

The identification of adult Timneh presents no difficulty. It is smaller than the Psittacus erithacus Erithacus and is distinguished by two specific anatomical criteria perfectly visible that do not deceive.

First, it always presents an uncolored spot on the upper mandible (rhinothec), a flesh-colored spot corresponding to a lack of pigmentation of the horn at this level.

Then, the tail is never scarlet red but always “wine-binding”. 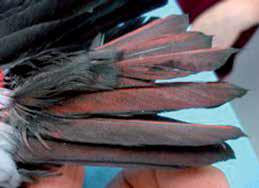 Statistically speaking, I receive in consultation a Timneh for 99 gray Congo. Also, we will speak only of the latter while remembering however that all that will be written about the Psittacus erithacus erithacus can be transposed to the little Timneh.

Personally, I do not know any breeder specialized in the reproduction of Psittacus erithacus timneh and I regret it. These breeders are in any case very few in comparison with grazers of the Congo and the number of couples used for reproduction in these amateurs is probably not very high since the Timneh is met only sporadically in specialty stores.

I can only encourage these few breeders to promote this small parrot sidelined for its only size while it has virtually the same qualities as Congo gray and the same nutritional and environmental needs.

At 7 weeks, the tail feathers are already red but their ends are dark gray to black until the first molt.

During this period, the distinction between the two subspecies will be essentially based on the flesh-colored spot visible in the upper mandible of Timneh. Once this first molt has been completed, the newly formed tail feathers or feathers will appear totally scarlet red.

The iris of the young gray parrots is dark, very dark or almost black. It is even darker than the bird is young and this color will go lightning over the months to become very light gray to one year.

A mature bird will have a slightly dirty silver-colored iris.

2) The tail of an adult Psittacus erithacus Erithacus showing that the feathers of the tail are uniformly bright red.

On the whole, the bird looks very light gray or very dark gray, almost black in some males. The underside of the coat is always clearer than the top for a particular set and the primary feathers – the large feathers of the wingtips – will also be always darker compared to the rest of the body.

The robust, stocky beak is shiny black, sometimes very chipped like an old natural slate. A perfectly smooth black beak is obviously more pleasant to look at, but this “chipped” appearance is not necessarily a blemish and may simply be the result of excessive use of the beak used as an instrument (hammer and pincer) to destroy everything. which is within reach.

A dog who practices agility as a sport every week with his master will never have the nails of his legs too long. Same observation for the hunting dog who uses them in the plowed.

Likewise, if Jaco likes to destroy his perches, his toys and all that you will present to him to let off steam, it is certain that the end of his bill will look like a small staircase consisting of superimposed horns blades.

However, a beak in such a state could also be the expression of a chronic deficiency of several nutrients and, therefore, I advise you to discuss it with your veterinarian. The general shape of Jaco’s body is a “pear”. The tail of the pear being his tail. In a healthy bird, this “pear” is practically immobile3, that is to say, that you should hardly see its respiratory movements. And if it makes a major effort, the respiratory movements must disappear after a few minutes.

In other words, if you notice that his body expands with the inspiration and contracts at the exhalation so too visible, it is better to make an appointment quickly with your veterinary doctor.

More seriously, you see that your bird has repeated movements of the feathers of his tail from top to bottom or from bottom to top, so do not wait, there is urgency.

Males are generally beefier than females.

The length of the bird from the tip of the bill to the end of the tail varies between 30 and 40cm. Its wingspan, that is the distance between the two ends of the wings stretched perpendicular to the axis of the body, is about 75 / 80cm.

These measures are of little importance to you except that it is desirable that the ideal dimensions of its cage are equal to 1.5 times its size in all directions …