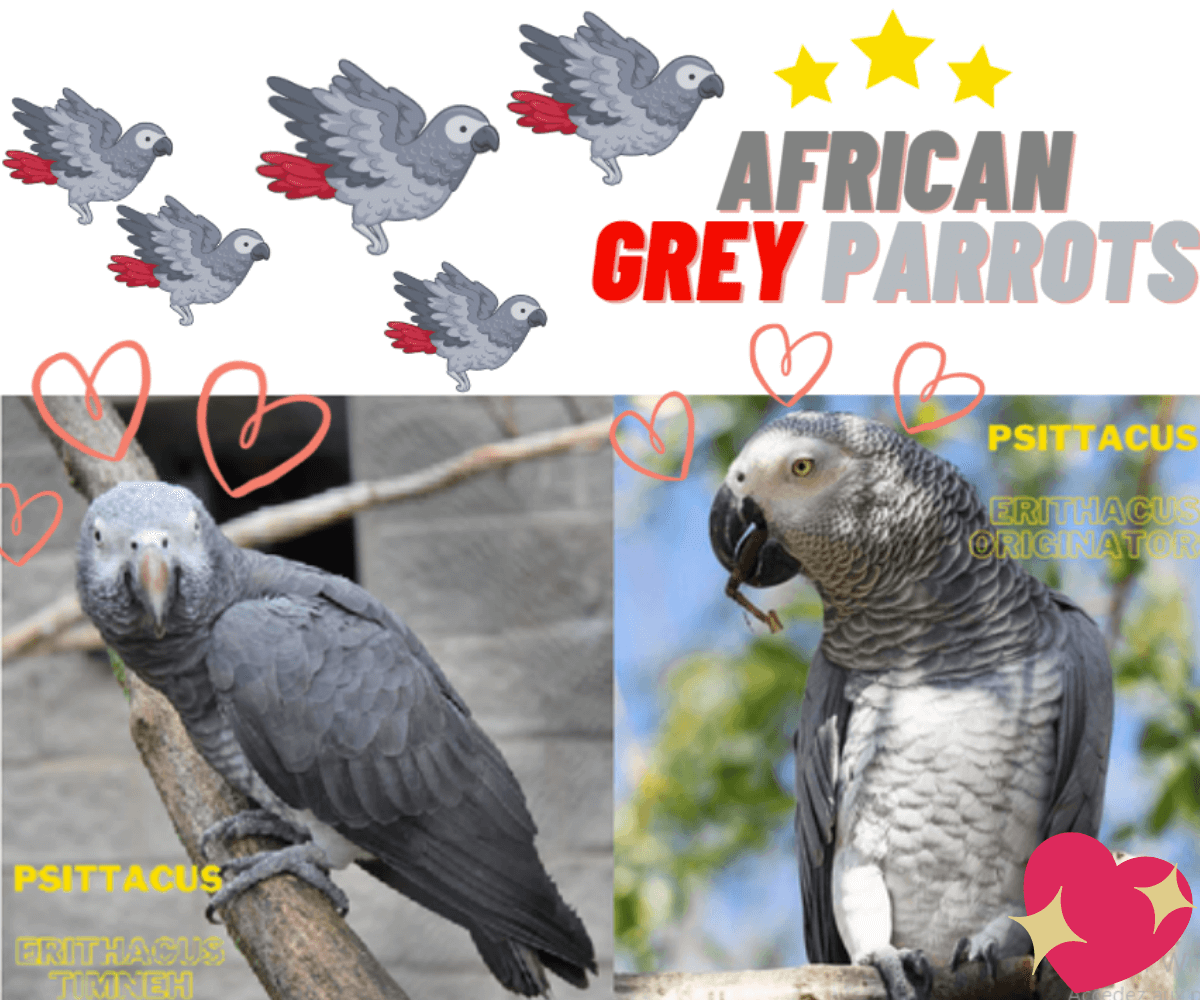 The African Grey or African Parrot is a species of the family Psittacidae. Besides African Grey Parrots, it is also commonly referred to as African grey and Congo African grey. He is the best speaker among parrots and the best-selling in France and Belgium and USA.

Its standardized name CINFO is Parrot African Grey, but it is referred to in different ways in everyday and commercial parlance. Besides African Grey Parrots, it is also commonly referred to as African grey and Congo grey

Timneh Gray and Gabon Gray: What are the differences in character and behavior?

Between the Congo African Grey and the Timneh African Grey, the differences are not limited to the appearance of the plumage. Everyone has their own unique aptitudes and character traits.

In African grays, two subspecies can be distinguished, the Congo African Grey (Psittacus erithacus Erithacus) and the Timneh African Grey (Psittacus erithacus timneh). At first glance, nothing seems to really distinguish them. Both are gray with a red tail. But the plumage of the second is darker and its tail is red/brown. It’s also a bit smaller, which might seem like an asset to those who are impressed by an oversized bird. 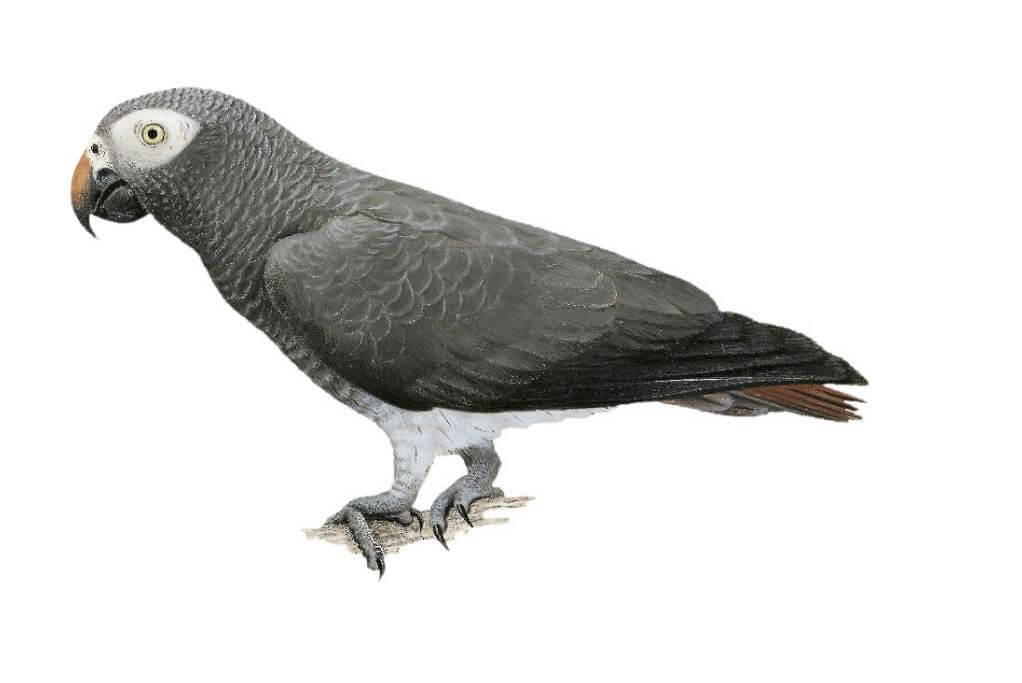 Timneh parrot is more difficult to find inbreeding. This can easily be explained. On the one hand, they have always been imported in small numbers compared to their cousins. On the other hand, this species seems less prolific, which is somewhat lacking in interest to breeders.

Some even end up reselling their couples for lack of a sufficient number of young. This is unfortunate, given the qualities of these birds.

In addition, the latter seems more outgoing in society than those from Gabon. The presence of foreigners does not bother them. They are so comfortable that they don’t forget to play or talk.

The flip side is that they won’t hesitate to do more silly things to get your attention. The main reason is that they are kept in small breeding structures, where greater care is taken, which forges a more balanced character.

However, the juveniles are discreet, unlike the Congo African Grey babies. But the wild subjects of the Timneh are relatively easy to tame. Their naturalness, therefore, seems more driven towards contact with humans, regardless of how they were brought up. The Congo African Grey Parrots originating from the region of Ghana in Togo have a size close to that of Timneh (between 275 and 350 g). But the further away we are from this area, the bigger they are. Going towards the east, the shades of the plumage are lighter, while towards the south they are darker.

This means that if your parrot is from the Congo, it will be quite large, in the range of 500-600g, and a lighter shade of gray. If he was born in Angola, he will be tall and dark gray. A subject from Cameroon is rather medium in size (400-450 g) and medium gray

Both varieties show great speaking skills and can acquire a large vocabulary. Their faculties of imitation are incomparable, including in terms of clarity. This talent often takes on its full dimension from the age of one or two.

Like a human baby, they need the training to be able to form sounds and develop the muscles through which they control the formation of words. But whether it is one of the other, subjects captured in the wild remain reluctant to manipulate at the start, despite all the patience and gentleness that a master can show Congo African Grey has a lifespan of up to 80 years, although most individuals do not exceed 45 years. It is a gregarious bird, but when it reaches sexual maturity, The African grey parrot chooses a mate and unites for life. It is a faithful bird, calm and shy and very funny.

The skin around the eye is whitish and bare. The iris is yellowish. The head is scaled with white on a gray background, the color continuing by gradually darkening, going towards the back and the chest. The wings are medium gray. The rectrices and upper tail coverts are brilliant scarlet red. African grey legs vary from gray to blackish brown. Immature African Grey parrots have gray irises and more red, the dark red on the tips of the rectrices

The African Grey Parrot Weighing around 410-500 grams, it feeds on plantations and seeds in forests

It is approximately 40 cm long. While P. timneh , formerly P. e. timneh (thus a subspecies) measures rather 30 to 35 in length. Let us add that this second species has rectrix feathers on its tail which are brown to dark brown and not red. It is also generally a darker gray.

These two species live in groups of several hundred individuals. They are frugivorous and granivorous .

He is known to be the best imitator of human language. It is the type species of Psittacidae, that is to say, that biology considers it the main species of “parrot” since the “Psittaciformes” clade takes its name from the scientific name of the Congo African Grey Parrot.

The African parrot inhabits central west Africa. On the other hand, now that a phylogenetic distinction is drawn between the two species, let us note that the Ivorian Comoé river constitutes the separation between the distribution of P. Erithacus and that of P. timneh . To the west of the river is P. timneh African grey and to the east P. Erithacus

The African Grey Parrots are gray with a red tail. He is the main parrot, he is probably the best Parrot speaker that one can know. With education, he is able to understand what he is saying, and with all the words learned he is up able to construct sentences. It was already a companion bird in ancient Rome.

The Grey Parrot inhabits much of West Africa. Especially in the forests, on the trees. Usually, they live in groups of 100 to 200 individuals, but some groups can have a huge composition of up to 10,000 birds. There are few predators, a few vultures, snakes. But the worst predator he has had is man, once he was exterminated for the devastation he caused on cultivated fields. Now the farmers have realized their market value and somehow “profit” from this bird.

The Grey Parrot is almost entirely light gray, its head is partially white, its beak is entirely black and pointed, its belly almost white, and much of its tail is ranging from red to burgundy red. As for the other part, it is black. The Parrot Timneh, its descendant, has a gray shade that is darker, it has a little pink on its beak and its tail is entirely brown

African grey diet: It is frugivorous and granivorous, ie it feeds on fruits and seeds. As with all parrots, its beak is phenomenally powerful and is capable of cracking nuts. He uses his paws as his hands.

African Grey is a bird of excellent company, very affectionate, and very endearing. He is renowned as the smartest of parrots, which explains their success. Its intelligence is comparable to that of Hominids.

It is one of the oldest parrots in captivity and the most popular mainly because of its calm temperament, its intelligence, its remarkable ability to reproduce perfectly the sounds, the human voice and especially ….. to speak to communicate.

He is also appreciated for his great sensitivity and his incredible empathy with people.

The African Grey is more reflective, suspicious, and therefore more fearful than other Psittaciformes species.

They seem to classify any human or object around them into 2 categories:

Like almost all parrots, a male will seek out a partner with whom to form a lifelong pair. Once formed, they first look for a good place in the trees to turn it into a nest (African Grey Parrots do not build one) and hatch the eggs.

The Congo African grey parrot has the intellectual capacity of a 6-year-old child, the emotionality of a 3/4-year-old child. For him, putting a shape back in its place (hole) is child’s play.

He doesn’t just repeat words but rather understands what he is saying.

The Parrot African Grey and justice!

The grays of Gabon are known to be intelligent and can also solve forensic investigations! Here is a story to prove it: In May 2015 in the United States.

A Parrot African Grey named Bud witnessed the murder of his master by the latter’s wife, an investigation was opened following this. While inspecting the house, the cops got a big clue, Bud the parrot kept saying “《Don’t shoot f *****!》 “, Which suggests that the woman shot. on her husband.

Another detail confirms this murder, the couple was going through a difficult period, etc …

When your Congo African Grey parrot or Timneh gray parrot moves, moves, inflates its feathers or even pinches you, it tries to communicate with you. By dint of observing him, it is possible to understand the meaning of his attitudes and behaviors.

Before recognizing a behavior indicating a health problem, it is imperative to know how to recognize a parrot African Grey in a state of full health.

Congo African Grey preservation: This species is classified in the category of threatened species, more precisely among those being vulnerable. More than 360,000 individuals were exported between 1994 and 2003, of which 80% of them were destined for Europe and the US.